In The Bunker with Mick the Grip 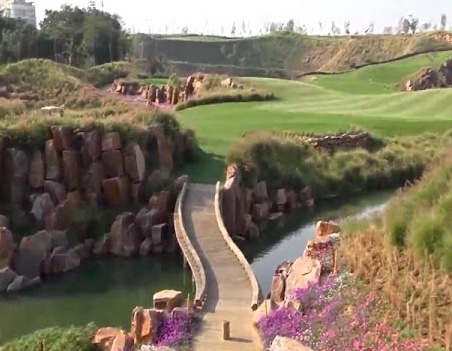 The DLF Golf and Country Club.

THE (HERO) INDIAN OPEN will be held on March 18th at the DLF Golf Club near Delhi. The first Indian Open was won in 1964 by Peter Thomson, who had inaugurated it after realising India's potential as a golfing destination. Thompson won again in 1966 and 1976, and in 1970 the Indian Open joined the Asia Golf Circuit. The field increased in strength with notable winners such as three time major champion Payne Stewart. Defending Champion this year is Stephen Gallacher.
The DLF Golf Club was originally designed by Arnold Palmer, but in 2015 a new course, designed by Gary Player was opened, incorporating some of the original holes. The result has been called 'The most bizarre course in golf,' with waterfalls, an island green, sheer bunkers and a rock quarry. It is also known as one of the most challenging, especially the 14th, which was originally a 550-yard dogleg par four with a 250-yard carry to a narrow fairway. The players could not play it (poor lambs) so the European Tour was forced to move the tee up to 461-yards.
THE FIRST GOLF CLUB IN INDIA was founded in 1829 and named the Dum Dum Golf Club, later the Royal Calcutta Golf Club. The Amateur Golf Championship of India, the 2nd oldest in the world after the Open, was first held there in 1892, players came from Ceylon, Burma, Penang & Singapore. At the RCGC Colonel Bufton-Tufton could have a round of golf in the morning before a spot of pig-sticking in the afternoon. Life must have seemed flat back in Budleigh-Salterton after that.

LOCAL EUROPEAN TOUR PLAYER Bradley Dredge, who is based at La Finca, retained his tour card at Q school at Lumine in Southern Spain, being one of 125 players hoping to finish in the top 25. He eagled the 18th in style to qualify by one point. Whoever said golf was relaxing?

GRAEME MCDOWELL, who recently claimed his first European Tour title since 2014 by winning the Saudi International, will host the Irish Open on May 18th at Mount Juliet, County Kilkenny. Rory McIlroy and several other PGA Tour players say they will definitely be playing, but as the organisers have threatened to make everyone wear masks if the Coronavirus continues it will be a hell of a job to know who's winning.

WHEN RORY MCILROY asked Brad Faxon for a putting lesson, Brad told him to try putting from 8 ft with his putter, a sand wedge and a 5-wood. Out of nine putts Rory holed one with the putter, two with the sand wedge and three with the 5 wood. Brad told him: “These days they will tell you that you must have the right length putter with the correct lie and correct loft. Your 5-wood has 19 degrees of loft and is 10 inches too long and you've just holed three in a row, so you need to get back to playing instinctively." McIlroy said afterwards: "Unbelievable, after that one session I went to Bay Hill and had the best putting week of my career." This month his patchy back nine at Riviera included a triple -bogey. Back to the drawing board.

TAYLOR MADE SAY their new Truss putters are revolutionary, although Callaway have tried something similar before.  The mallet and blade putters connect both front and rear of the putter head to the shaft,  supporting the putter in the same way roof trusses support and strengthen a roof. This improves stability, especially on short putts. Perhaps Rory needs a Truss