IT'S BEEN A GREAT 6 MONTHS (PART THREE)

In The Bunker With Mick The Grip 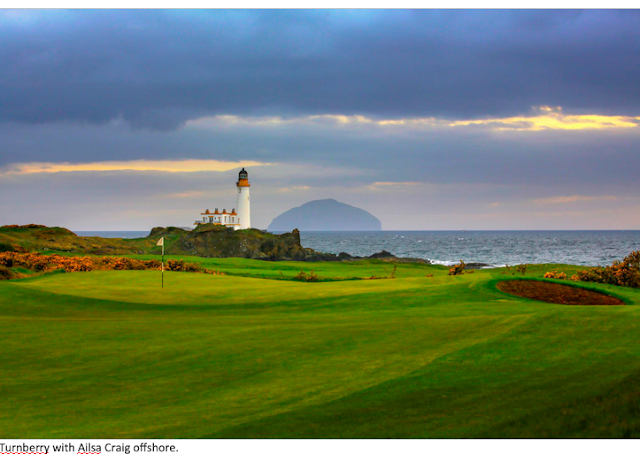 THE WOMENS’ BRITISH OPEN takes place from 1st August on the Marquess Course at Woburn. Not to be outdone, Trump Turnberry is holding a Ladies Open on August 22nd on the King Robert the Bruce course. Prizes range from fourball vouchers to an overnight B&B stay at Donald’s place. Nervous ladies are assured Mr.Trump will not be in residence.

WHEN MAX FAULKER won the Open in 1951, people asked Bernard Darwin if he had managed to get a word with the Champion. “My readers,” said Darwin, “are interested in what I think about his win, not what he thinks.”

WHEN GENE SARAZEN’s BALL landed in a bunker at the 1932 Open Championship at Prince’s Golf Club, Sandwich he pulled out a club hidden in his bag that he designed himself. Inspired by how air travels over an aeroplane wing, Sarazen built a lofted club with a flange lower than the leading edge so the club would “bounce” through the sand and produce more consistent shots. It’s known today as the sand wedge, but after Sarazen’s win his competitors dubbed it “The Weapon.”

ROYAL LYTHAM & ST. ANNES will host the 33rd edition of the Senior Open Championship from 25-28 July. Miguel Angel Jimenez is defending champion, having had a one-stroke victory over Bernhard Langer last year at St. Andrews. Puffing on his Opus X Arturo Fuento cigar, he explains in a video what was in his bag on the day, including his Ping Sigma Fetch putter with a hole in the middle to pick up the ball. Unfortunately, as his English makes Sevvy sound like Sir Laurence Olivier we have to guess why he only uses 10 clubs.

BERND WIESBERGER finally sunk his three foot putt and Benjamin Hebert three-putted to end the Scottish Open playoff. The two protagonists had to go down the 18th three times after both parring and bogeying the hole on the first two trips and missing putts like 36 handicappers, while the onlookers put on more jumpers and hoped the pair would wrap it up before the pubs shut.
NO CHANCE of the pubs shutting in Portrush on the Open Sunday. The clubhouse ran out of beer at around 9.00 p.m. Lowry and family, complete with Claret Jug in the back, headed for Dublin, where the odd drop of Guiness could still be found.
A GOLFSPY REVIEW on the Honma TW747 VX irons: “This classy-looking forged steel iron packs a real punch. The extra forgiveness will be welcome news for those pondering a first switch to a forged iron.” Justin Rose uses them, but at over £1,000 for six, pondering is all most of us will ever do.
Justin also uses an Axis 1 Rose Proto putter made from 303 stainless steel and carbon fibre, with wing-like extensions. From 2012 to 2017, Justin was giving away shots on the green. Then, in 2018 he dedicated himself to improving his stroke. The hard work paid off and he won twice, collected eleven top-10 finishes and took home the FedEx Cup. On the PGA Tour this year he is the Most Improved Putter. Just goes to show there’s nothing like practice.

LEE WESTWOOD chatting to Radio 5 Live: “One of the main reasons youngsters dont take up golf is it’s too hard. We should be trying to make it easier, perhaps different formats where maybe the hole is bigger, and theres not so much rough on the courses so people are not out there looking for their golf balls all the time. I think that’s part of the problem, that it is a hard game to play.” I know the answer Lee, attach elastic to the ball!
Why didn’t someone tell us golf was hard when we started? Knowing that would have put us right off and saved us years of misery.