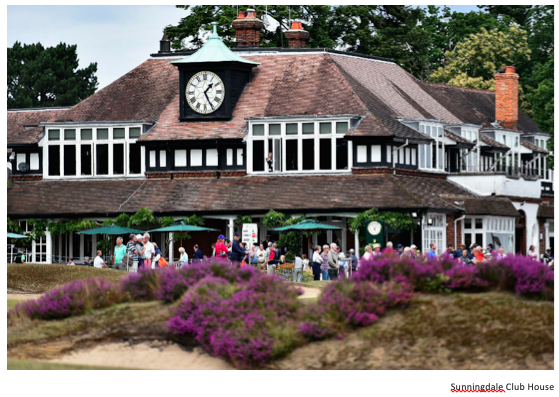 WHAT WITH SHOT CLOCKS and Super Six sprints,there is no shortage of attempts to modernise golf tournaments. The European Tour wallahs should perhaps spend a few days at the Sunningdale Foursomes, held in  Berkshire every March anything can be learned from it.

The historic, much-loved event welcomes male and female amateur and pro golfers to one of Britain's finest golf clubs.  The annual Sunningdale Foursomes was first played in 1934, and is open to all golfers through a unique handicap format, which allows pros, amateurs, men and women to compete fairly from the same set of tees. They find out what a leveller alternate shots can be.

All Professional Golfers (Men) play from a handicap of +1.

All Amateurs (Men) play from a handicap of scratch.

All Professional Golfers (Ladies) play from a handicap of 2.

All Amateurs (Ladies) play from a handicap of 4.

Foursomes is still very much part of golf in England and it showed at last year’s Ryder Cup (Europe won the foursomes matches 6-2.)   Past Sunningdale winners include Max Faulkner, Peter Alliss, Luke Donald, and Ross Fisher.This year two former Open Champions, Sandy Lyle and Paul Lawrie, happily teed it up with the amateurs.  Womens’ Open championGeorgia Hall played in a field that included two mens’ European Tour players.  They allcome and subject themselves to the early spring weather (particularly unfriendly this year) and the likelihood they will be eliminated by some chancers no one has ever heard of in the second round.

TWENTY FOUR YEARS AGO on April 3rd, 1995, Tiger Woods, aged 19, drove through the gate at Augusta National Golf Club for the first time. He was not impressed, commenting: “Magnolia Lane, is that it? — I thought it was a pretty short drive.”  Nick Faldo said after his first practice round with Tiger:  "He hits it long, his shoulders are impressively quick through the ball. That's where he's getting his power from.  He's just a very talented kid."  Woods made the cut and tied for 41st.  Two years later, in 1997 he won the Masters aged 21, with a record 270 (18 under) twelve strokes ahead of Tom Kite.   They lengthened the course after that.
THOSE WERE THE DAYS: In the 1980-90’s the Masters almost became European property with Sandy Lyle (1988), Nick Faldo (1989, 90 and 96), Ian Woosnam (1991), Bernhard Langer (1985 and 93) and Jose-Maria Olazabal (1994 and 99.)  It would be nice to think the European golfers today could start another run, there are some promising contenders. After the recent Players Championship I’ll have a bob on McIlroy.
GOLF LORE SAYS if you win the par 3 tournament before the Masters, you are guaranteed a rotten finish in the real thing. Some players have admitted to throwing the par 3 or skipping it completely to increase their chances.  It will be interesting to see who wins the par 3 this year.
LPGA Tour

Before 1982 the local caddies had a hard time of it at Augusta.  The club  was only open for 7 months of the year and members were forbidden to tip them. They lived for the chance of a share in the Masters prize money.

However, in 1982 play ended early on the Thursday due to a storm so tee times were brought forward to the Friday.   Some caddies did not realise this and weren’t on the tee the next morning, and some players found the caddies had not dried their clubs for them. After that it was decided that Augusta could no longer bar tour caddies, although some players kept theirs on.  Jack Nicklaus said he couldn’t lose his faithful Willie Peterson, who was at his side for all his six Masters victories, and who’s dance when Nicklaus holed a 40-footer for birdie on the 16th in 1975  would have won him a place on Strictly.til next time
Another of David Lettermans reasons why golf is better that sex:.When your equipment gets old you can replace it!
Until next time: Happy Golfing. 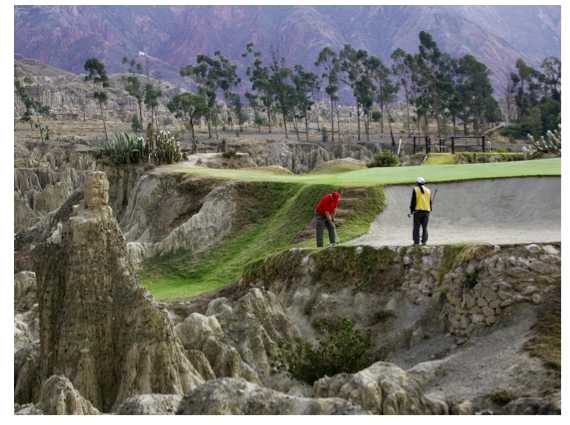 WORLD’S HIGHEST GOLF COURSE: La Paz Golf Club, Bolivia, 10,600 feet. Two miles above the ocean the ball flies 20% further, and you can confidently expect to add 30 yds to the average 5 iron shot, as long as you can still breathe in the thin air.   Your ball will also fly straighter.  The view at the 12thchanges from green valleys to a lunar landscape of sandstone canyons.   The closest course to the moon on the planet, La Paz actually resembles it.

AT THE  WGC Chapultepec, Mexico, 7,800 ft above sea level, 10 drives were recorded at over 400 yds, although surprisingly, not by the eventual Tournament winner Dustin Johnson.  Justin Thomas, who hit the green in 415 yds on the par 4 12th and had the longest drive with 457 yds on the par 4 10th said:  “The hardest part is breathing.  You can’t walk and talk at the same time out here.”  Stop whingeing Justin, think of the poor members of La Paz.

THE HIGHEST GOLF ever played was at 16,000 feet in July 1899 by British explorer Captain F. Adair.  In his book, "A Summer in High Asia," he wrote: “Travelling through a Himalayan mountain pass into Tibet I found a lovely spot carpeted with bright green turf. Being a golf enthusiast I had brought with me a driver and putter."  No golfball?
SINGLE-RIDER GOLF TRANSPORT is big in the USA. The hits of the PGA Show were the Finn Scooter, which grips a golf bag on the front, and the Phat Scooter, which holds  a golf bag on the back.   In the gear section top-quality clothier Galvin Green introduced “ShakeDry,” a completely waterproof, impossibly light material. A jacket ($400) weighs just 174 gms, about the same as an iPhone. With matching trousers in 25 sizes!   I’d like to see size 25 trying to get on a scooter.
SEGIO GARCIA APOLOGISED for his recent behaviour saying: “I wasn’t myself, It’s not who I truly am.”  Actually, he’s not been himself quite a lot.  In the World Match Play he threw his shoe into the crowd. In 2007 he spat in the hole.  In Thailand he slung his iron in the lake. At the 2012 US Open he smashed an inoffensive microphone, and in the 2017 Open he attacked a gorse bush but unfortunately for him the bush retaliated.  At the Valero Texas Open Sergio threw his club into the woods then embarrassingly had to go and find it.  This month in the Saudi International he became a one-man sandstorm in the bunker and ended up disqualified after damaging five greens.  But remember folks, it’s not who he truly is.
THANKS TO DIETING and intensive workouts Phil Mickelson is still able to beat golfers half his age, winning the Pebble Beach Pro-Am with a 7 under 65.   “It takes a lot more effort to play at this level now,” Mickelson said. “but after nine months of hard training I’m swinging 6 mph faster.”  Mickelson’s grandfather was one of the original caddies at Pebble Beach, and Mickelson carries a silver dollar ballmarker engraved with the year of his birth. “This is a special place for me.” Phil said.  It could get even more special if he wins the US Open there in June, completing his career grand slam.  Worth a few spinach smoothies and  runs round the block.
THE LATEST ADVICE  after a bad shot is ‘take several deep breaths then laugh out loud.’  Apparently it releases tension and gives a positive attitude.   You may be removed from the course in a plain van, and don’t try breathing deeply at Chapultepec, you’d pass out.  Still, perhaps someone should mention it to Sergio.
SUNG HYUN PARK, the current World No. 2, won the HSBC Womens World Championship at Sentosa Golf Club, Singapore, with an 8 under par 64 after 9 birdies and 1 bogey. S.Korean Park began the final round four shots behind World No. 1 Ariya Jutanugarn, who dropped to 8thafter 2 double bogeys.  No loud laughs were heard from Ms Jutanugarn.
Until next time: Happy Golfing.
Contact Mick for regripping and repairs.  638 859 475.
Posted by Mick The Grip at 11:05 No comments: