AUTUMN ROUND UP AUGUST SEPTEMBER OCTOBER 2018

AUGUST IN THE BUNKER 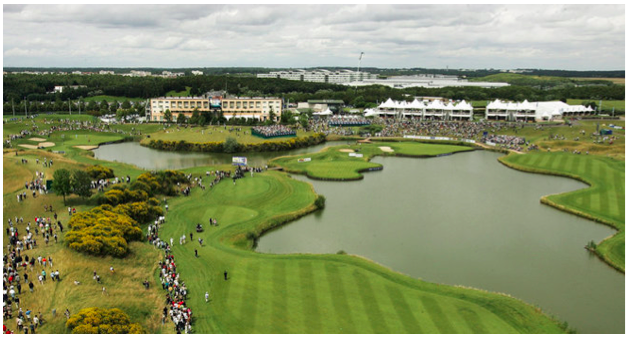 Le Golf National, also known as the Albatros course, some 20 miles S.W. of Paris, features dramatic elevations and unique hazards. Almost in front of the clubhouse is the amphitheatre that contains the 15th, 16th and 471 yd. par 4 18thgreens, and the grandstands with a capacity of up to 80.000.  WhenGolfalot.com founder Martin Hopley played L’Albatros he reported:   “If you don’t hit the fairways then you’ll have a very long day.  The first two holes can really derail your round before it gets started.”  If not, 80,000 fans screaming in your ear would probably do it.
However many spectators there are, the French won’t be much in evidence, according to pro golfer Michael Lorenzo-Vera, who says of his countrymen: “There won’t be many French people at the Ryder cup. Honestly, nobody in France is aware of the Ryder Cup, only golfers.  Golf is a very private thing for people in France, there are just private courses for rich families and spoiled kids, that’s it.” They’re just miffed they didn’t invent the game first.

The French Open was a great chance for the visiting team to take a peek at the Albatros course. Naturally it’s easier for Europeans to arrange their schedules for a Ryder Cup warm-up but the fact that American-based players like Jon Rahm and Ian Poulter have also done so speaks volumes.  Justin Thomas played in the French Open, but his probable teammates stayed at home and put their feet up.  Both teams will have three days’ practice in Ryder Cup week but It will still be a rush for the Americans to familiarise themselves with the course. Complacency means that the favourites will perhaps be a little more vulnerable than they could have been.  With luck!
One golfer who does not nurse fond memories of The Albatros Course is Jon Rahm.   In the French Open the  Spaniard was scuppered by a triple-bogey 7 on the 433 yd. par-4 12th. Badly disturbed by a clicking camera on his backswing as he teed off, his ball bounded for the rough on the right of the fairway.  Rahm hacked and slashed his way through the fescue, only managing to reach the green with a fourth gouge. To say he was unhappy at this unfortunate turn of events would be something of an understatement.
Always aflamboyant character, Arnold Palmer was one of the first to fly himself from tournament to tournament in his Learjet.  He set a record for the fastest trip around the world, he and his co-pilots taking just over 57 hours to complete the journey.  When Ben Hogan, who disliked Arnie anyway, was captain of the American Ryder Cup team in 1967 Palmer did aerobatics over the tournament site while Hogan was practising, which is said to have annoyed Hogan so much he left Arnie on the bench the next day. (The USA won anyway, by 23 1/2 to 8 1/2., still a record.)

Rory McIlroy is missing the first event of the PGA Tour's FedExCup play-off series, the Northern Trust in New Jersey. He told reporters: “I need to assess where I'm at, and I think the best thing for me to do right now is take a couple of days off, do some practise and reflect on what I need to do going forward.”  What Rory needs to do is stop practising, stop reflecting, keep playing and win something.  Before the 28thSeptember would be good.
Spain’s Miguel Angel Jimenez won his second Senior Major Championship, beating tournament favourite Bernhard Langer by a stroke at St Andrews. Leading on the final day, Jimenez shot a three under par round of 69, paring the final three holes for victory.  Definitely worth a large cigar!
Some Bob Hope Classics:
“It’s fun playing with Dean Martin at Riviera. When he wins anything, we always tell him.”
“I don’t know how you’d describe my swing, to some it looks like a polo player without a horse.”
“Billy Graham always wins, but then look at the help he’s got.”
SEPTEMBER IN THE BUNKER 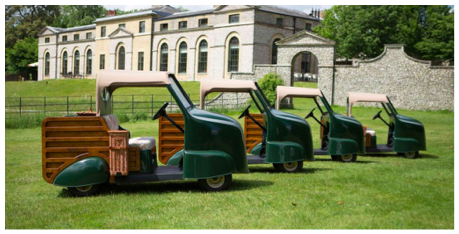 Woodies’ in front of the clubhouse

THE CONVERTED foxhound kennels at Goodwood House in Sussex, make an impressive clubhouse for the members of Goodwood Golf Club.The buggies, called Woodies, (designed by the 9thDuke) boast a mohair roof, as used on Jaguar E-type convertibles, and a cool box inside a willow basket.  Complete with bottle of bubbly no doubt.   Very John Steed and Emma Peel.

On 7th September, the James Braid-designed Downs Course was transformed back to a bygone era, as golfers donned tweeds and plus fours to take on the Annual Revival Golf Challenge.  Five-times Open winner Braid was always admired for his elegance:  Norfolk jacket, collar and tie.   Each participant had a pencil thin golf bag and hickory shafted clubs comprising Brassies, Mid-Irons, Mashies, Mashie Niblicks, Niblicks and Spoons. These proved far less forgiving than their modern counterparts, so the ‘wee dram’ handed out at the half way house was very welcome.After lunch the players watched vintage car racing on the Motor Circuit.  As Bertie Wooster would say: “A perfectly fruity day!”
DOUG McLELLAND, owner of a golf superstore in Chobham, Surrey, was once contacted about giving golf lessons to the Queen’s second son.   The phone rang in Doug’s house and his young son answered it.  “Could I speak to Doug?” came a voice, “Whose calling?” asked the lad.  “The Duke of York,” came the reply.  “Ok, hang on a minute,” said the chirpy youngster, shouting over his shoulder, “Dad, it’s the pub on the phone.”

IN 1933, SAMUEL RYDER of Ryder Cup fame, and captain of Verulam G.C. Herts, was asked by his daughter Marjorie, living in the then Rhodesia, to send over a trophy for the local club to play for.  Ryder sent a small silver replica of the Ryder Cup. The Zimbabwe Ryder Cup was intermittently played for by the locals up to 1980 when politics got in the way, but in 2014  a friendly tournament took place between local Zimbabweans and an amateur team from Hampstead G.C. who all paid their own passage.  After a three-day tournament in strict Ryder Cup format the home team won 17-11 in torrential rain.  This month a match was held between Verulam G.C. and Hillside G.C. a four-hour drive from Harare, but the results have not yet arrived.  The players may still be up a tree with lions circling at it’s foot.

JUSTIN ROSE will be remembering his 2002 triumph at Walton Heath when he hosts the British Masters there from October 10th– 14th.  In a nail-biting final round he edged out his mate Ian Poulter by one stroke to finish on 65.  Poulter said: “I put him up and fed him all week, and then he wins the trophy. I even fed him on the Sunday night!”

Poor old Justin might have been invisible at East Lake with crowds clambering over him to get to Tiger, but he didn’t look too disappointed with his FedEx Cup winner’s cheque.  I’d jokingly comment that his wife can have her new kitchen now.  But perhaps better not.

BRYSON DeCHAMBEAU was spotted on the East Lake range, preparing for potential morning dew on the golf ball by having a member of his team spray each golf ball between practice shots.  No wonder they call him the Mad Scientist.

IF YOU’RE LUCKY ENOUGH to be blessed with the skills of a pro golfer you get to play the world’s best courses regularly, but at the Alfred Dunhill Links Championship (4th-7thOctober) you get it with knobs on.   The pride of Scotland: St. Andrews Old Course, KIngsbarns and Carnoustie await you, with celebrity amateurs providing added entertainment, and the only possible downside being the weather.  Two-time winner Tyrrell Hatton will be hoping for a hat trick,but as he seems to have modelled more than just his swing on Colin Montgomerie there may well be tantrums if he comes unstuck.

One of David Letterman's Top Reasons Why Golf is Better then Sex:
You can stop in the middle and have a beer and a burger.

OCTOBER IN THE BUNKER 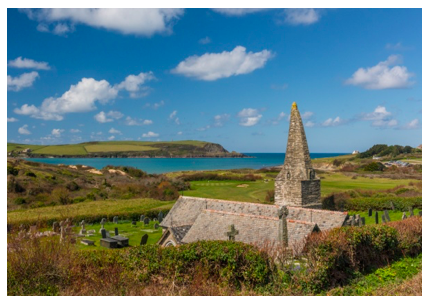 THE CHURCH COURSE at St. Enodoc Golf Club, Cornwall, takes it’s name from the tiny 13thcentury church that stands to the right of the 10th green (Peter Alliss’s favourite.) The 6thgreen involves a blind second shot over the “Himalayas,” a towering, 75ft high bunker.  The church itself, which can only be reached by a footpath crossing the fairway, was abandoned for many years, covered by drifting sand, and in the early 18th century the vicar had to be lowered through a hole in the roof to perform the rites necessary to keep it sanctified.  JollyPoet Laureate and keen golfer Sir John Betjeman, who holidayed in the area as a child, loved the Church Course, and is buried in St. Enodoc churchyard.  Doubtless he composed “Seaside Golf” after a blissful game, safe in the assurance that neither wife nor girlfriend would suddenly appear over the sand dunes after him.
Seaside Golf:  ”A glorious sailing bounding drive, that made me glad I was alive.”
Unforgettable, as is the parody penned by Lord Butler:  “ I hit the damn thing on the head, it made me wish that I were dead.”   Check it on Google if you want a good chuckle.

AFTER COMPETING IN THE British Masters at chilly, soggy Walton Heath, Sergio Garcia hosted the Andalucia Masters at Valderrama, expecting to defend his title in warm sunshine. Unfortunately, poor Sergio was cold and wet again, but did manage to complete his hat trick of Andalucia Masters victories with a 4 shot victory over Shane Lowry, who is no stranger to soggy weather either.

TO MAKE THE AMERICANS feel at home in Paris the French Ryder Cup organisers dished up burgers and French fries.  Very thoughtful of them; after the U.S. team’s disastrous weekend  being confronted by escargots would have been the last straw.

PATRICK REED contradicted Jim Furyk’s explanation of why he wasn’t paired with Jordan Spieth, complaining: “Jordan doesn’t like me.”  I can’t imagine how that could be, such a likeable chap is Patrick.

RORY, DJ, AND JUSTIN ROSE play the P730s. Jon Rahm and Francesco Molinari play P750’s.  The P790’s are hugely popular with Amateurs.   Now, due to the rising popularity of forged irons, Taylor Made have introduced the P760 range.  Apparently, the P760 short irons are compact and precise while the long irons have a hollow construction.   Revolutionary SpeedFoam is injected into the club head in liquid form and expands within the club, generating ball speed while dampening vibrations.  Taylor Made says: “With P760, we have designed a players iron for tour-level competition, combining  the most desirable elements for the better golfer.”  They won’t be on my Christmas list then.
HAVING WON THE BMW International Open to record his third victory this year, England’s Matt Wallace was philosophical at being left out of Thomas Bjorn’s Ryder Cup team.  ‘”Obviously I was disappointed, I thought I’d done enough to get the pick,” he says, “but I’ve had a lot of disappointment in my career and always used it as fire to get better, so watch this space.”  Obviously an ex- member of the boy scouts, commanded by Sir Robert Baden-Powell to “smile and whistle under all circumstances.”

AMERICANS ARE UNDERWHELMED by the much-hyped Duel in the Desert between Tiger Woods and Phil Mickelson which takes place at the 7,560 yd. Shadow Creek Golf Club, Las Vegas on 23rd November, not least because they will have to pay to watch it.   Seen as a cynical exercise in money grabbing, the 18 hole match play duel is not generating the enthusiasm the organisers hoped for, despite the players plugging it for all it’s worth, and agreeing to wear microphones  to please the specially invited crowd.   There will be side bets in aid of charity, for NTP or longest drive.
Odds-on favourite Tiger (42) who has won 14 majors to 48 yr. old Mickelson’s 5, and has $116M to Mickelson’s paltry $88M. will probably pop the $9million winnings in his Tiggy bank.  If ‘Phil The Flutter’ wins the casinos will hang the flags out.