If you thought the Bubba hovercraft was amazing check out his new toy the JET PACK!!!!!!!!!

A keen golfer found himself in Africa with some spare time. He asked at his hotel for the nearest golf course, was put in a cab and driven deep into the jungle until he arrived at a course.
He asked to rent some clubs and requested a caddie.  Arriving at the first tee he found his caddie waiting with a bagful of clubs under one arm and a rifle under the other.
The golfer was taken aback, but composed himself and hit a good drive.  As they were walking down the fairway, a tiger sprang out of the rough and charged the golfer.  Without missing a beat, the caddie dropped the bag, aimed his rifle, and shot the animal dead.
Again, the golfer had to compose himself, but he hit a good approach shot, and parred the hole.

The same thing happened on the second hole, but this time it was a lion that bolted out of the jungle, charged the golfer, and was dropped by a single shot from the caddie’s rifle.

By now the golfer was visibly shaken, but the caddie looked unflappable —and obviously was a good shot — so they played on.
The third hole, an easy par three, was  on a lake.  As the golfer was walking onto the green, a crocodile slid out of the water and began moving towards him.  Unfazed, he looked to his caddie for help. But the caddie stood motionless. The crocodile moved closer, and the golfer nervously glanced again at the caddie, who didn’t move.
Finally, with the crocodile just inches away, the golfer screamed, “Aren’t you going to do something?”
The caddie looked at the scorecard and said, “I’m sorry, sir, but you don’t get a shot on this hole.” 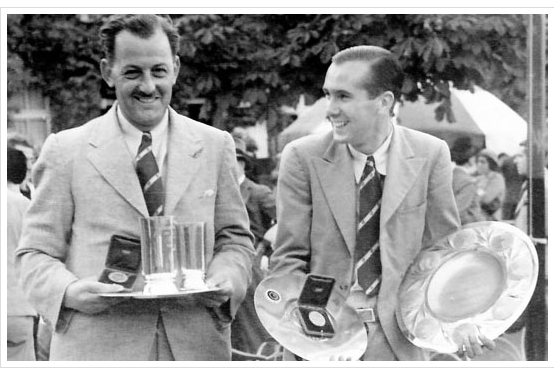 “THE GREAT GOLF PRIZE OF THE NATIONS,” an idea conceived by German Golf Union president Karl Henkell,  was a tournament to be held 10 days after the conclusion of the 1936 Berlin Olympics.   Hitler, seeing a good opportunity for Nazi propaganda, donated a magnificent silver and amber salver, and intended to present it to the victorious German team.   Invitations were sent to 36 countries but only six accepted: Czechoslovakia, England, France, Hungary, Italy and the Netherlands.
The contest was a four-round two-man team stroke event.  England’s team was Yorkshire’s Tommy Thirsk and Lancashire’s Arnold Bentley.
After three rounds the German pair had a three stroke lead, and Foreign Minister Von Ribbentrop, representing Hitler, rashly notified the boss of an imminent home victory.  Hitler set out from Berlin to present the prize.  However, Tommy Thirsk produced a superb, course-record final round of 65.  The English pair won, and the French overtook the German team for second place.

Von Ribbentrop raced off in a panic to intercept Adolf with the bad news.  Hitler was furious and ordered his chauffeur to turn the car round and head back to Berlin, leaving Dr. Henkell to present the prizes.  Records of the event appear to have been airbrushed out by the host country but the “Great Golf Prize” (nicknamed The Hitler Trophy) was brought home by Bentley and Thirsk, and became the property of the English Golf  Union.

In 2012 the trophy was purchased at auction by Hesketh Golf Club, Southport, of which Bentley was a member.  It now hangs proudly in the clubhouse, an historic reminder of golf and the 1936 Olympics, and a warning never to count your chickens.

WHEN SIR NICK FALDO was asked his opinion of Le Golf International’s Albatros course after the 1991 French Open, he pronounced it “ tough but fair.”   Anxious course designer Hubert Chesneau could have kissed him, and being French, probably did.   This year Rory McIlroy, Danny Willett and a host of top European players will test it for themselves when they attend the 100th French Open on 30th June, thereby missing the Bridgestone Invitational. McIlroy says the Albatross will be a better preparation for the Open at Royal Troon, two weeks later.

The French will be pinning their hopes on Victor Dubuisson.   Let’s hope he doesn’t jump in the lake in celebration, as prize plonkeur Thomas Levet did in 2011 after winning, breaking his leg in the process.

THE PING CROSSOVER, introduced earlier this year, is not a driving iron.  Just because it looks and quacks like a duck doesn’t mean it’s a duck.  Tour players such as  Fowler and McIlroy  are increasingly using this graphite-shafted combination of iron and hybrid which  combines the hollow head of a wood with the playability of an iron, and acts like an iron at impact.  It goes into the turf so the ball is hit higher on the face than with a hybrid, and the wide sole gives a decent level of bounce to help keep it going.  Very handy in the windy conditions of Oakmont.  Or Royal Troon. (The only problem is which of the hybrids and wedges do you leave out?)

BUBBA WATSON was expected to compete in the annual National Hickory Championship this week at Oakhurst, West Virginia.  The Greenbrier owns nine-hole Oakhurst, which opened in 1884. Bubba’s house (one of them) is nearby.  The  players use 19th-century equipment, wear 19th century clothing and play by rules that were in force in 1891.   Worth a look, if only to see Bubba in plus fours.

A recent Swedish medical study says  the death rate for golfers is 40% lower than that for non-golfers, and on a par with athletes and gymnasts.  That’s as long as players walk the course, burning off some 900 calories during an average round.  (Meaning you can still drop in the 19th afterwards and put 700 back on.)  For those of you familiar with the old Stanley Holloway song: “My word, I do feel well!”

Until next time, Happy Golfing.

Mrs Fulford and Mrs Chalmers played together regularly at their club. On the sixth hole, a par 4,  the second shot to the green must carry 80 yards over a lake.  Mrs. Fulford could never carry the lake and would always hit into it, totally psyched out by the presence of the water.
Her friend suggested that she pay a visit to a hypnotherapist.  So Mrs Fulford went for four sessions.  The therapist would “plant suggestions” that when playing this hole she would not see water, but rather a lush green fairway leading all the way up to the green.


Some weeks later a club member asked whatever happened to Mrs. Fulford, as he hadn't had seen her on the course lately.  The questioner was informed that unfortunately,  Mrs. Fulford had drowned in the lake on the par-4 sixth!
Posted by Mick The Grip at 17:07 1 comment: