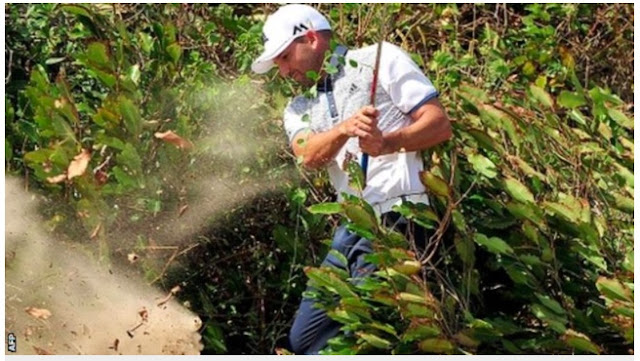 SERGIO GARCIA landed his first title in two years when he won the Vietnam Ho Tram Open in December after a four-way playoff.  Garcia (35) beat India's Himmat Rai at the 2nd extra hole after seeing off the other two contenders at the first.  Garcia lost a two-shot lead in the final round when he double-bogeyed the 17th, and at one point had to hack his way out of the jungle.  He pocketed £178,000, and it looks like he should have been awarded the Scout Orienteering badge as well.

EUROPE CARRIED OFF the Ryder-Cup style Eurasia Cup in Kuala Lumpur in fine style, winning the team event 18½ to 5½, and the singles matches 9½ to 2½.

Ian Poulter, Lee Westwood and Andy Sullivan won their singles and  Danny Willett clinched it with eight matches still out on course.   Then Matt Fitzpatrick sealed the trophy, beating Kiradech Aphibarnrat 2-up.   Captain Darren Clarke hinted Westwood and Poulter could both be involved in his Ryder Cup team, saying: "What Lee and Poults  brought to the team room has been priceless.”  Whatever it was they brought let’s hope they bring it to Hazeltine.

JORDAN SPIETH GOT HIS YEAR off to a good start  in the Hyundai winners-only tournament at Maui.  He finished at 30-under 262, joining Ernie Els as the only players on the PGA Tour to finish a 72-hole event at 30 under or lower.  His opponents also demonstrated some pretty impressive putting; Rickie Fowler found the hole from 45’ and Jason Day rolled in a superb putt from 75’, while Davis Love sank a 93’ putt with a hybrid.  Poor Ernie Els, fighting the yips again in the South Africa Open where he missed the cut, would have been happy to sink a two footer.

MICHAEL GRELLER was pulling out of the PGA Tour car park in the Bahamas last month when he realized that he had no idea which side of the road he should be driving on.

Two days earlier he had been caddying for his boss Jordan Spieth in Australia, where cars drive on the left.  Before that they were in Spieth’s hometown of Dallas, driving on the right.  Now he was in Nassau, without a clue which side to be on.  “I almost hit three or four cars before I found out,” he said.   After this week’s Abu Dhabi stint he’s headed for Singapore.  They should be warned.

JIMMY WALKER told Justin Rose last summer that his driving during one particular round was the best he’d ever seen.  Justin appreciated the compliment, and his response: "I wish I could putt like you" made Walker realize that all top players have something the others envy.

“No player has everything,” Walker says.  Some are best at one thing, some another.  Take Phil Mickelson’s short game, for instance.”

"They definitely wouldn’t want my short putter," Adam Scott joked.  Asked what he would take from Woods, he said:  “Everything.  It's still the best I've ever seen in one package. Every aspect of the game he did better than anyone."   Woods undoubtedly, would dearly love something of Scott’s:  his back and knees.

JAMIE DONALDSON, who hit the Ryder Cup-clinching shot in 2014, has had a nasty run-in with a chainsaw which left him with multiple stitches in his left hand.  Chainsaws, playing football, falling off Segways, skiing into trees!  If they had brains they’d be dangerous.

WATCH OUT at the next raffle for golfballs with tiny legs that scamper down the course, and pink tees shaped like Barbara Windsor.  You’ll know then it’s about a month after Christmas, and it’s safe to dispose of those little presents our nearest and dearest thought we couldn’t do without.
Until next time: Happy Golfing.