JULY A GREAT MONTH FOR GOLF

IN THE BUNKER WITH MICKTHE GRIP 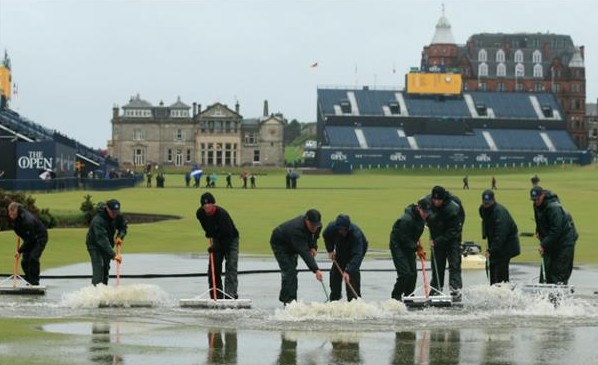 FRIDAY AT ST. ANDREWS:  A deluge of rain cascading onto the Old Course caused delays of more than three hours, despite the herculean efforts of the green’s staff.  Young Paul Dunne’s caddie stopped offering him advice and offered to give him swimming lessons.  Saturday was worse with the wind causing havoc.  As an esteemed golf correspondent once said, they really should consider playing this major in summer.

OPEN WINNNER Zach Johnson’s strict Christian upbringing stood him in good stead on the 18th green when microphone waving interviewers charged up asking inane questions like: ‘What does this moment mean to you?’ He managed to choke out a polite response, but must have wished, briefly, that they would go forth and multiply.

AFTER WINNING The Greenbriar Classic 24 yr. old Danny Lee confided that he just wanted someone to celebrate his $1.2 million prize with; preferably a girlfriend.  After playing eight tournaments in nine weeks he said he was tired of coming back to an empty hotel room.  I imagine the next sound was his hotel door being flattened as 5,000 potential girlfriends arrived.

THE RICOH Womens’ British Open (July 30th to August 2nd) will take place at the much Trumpeted Trump Turnberry Resort, Scotland.  Mo Martin, the 2014 champion will be defending her title against a star studded international field, including New Zealand’s Lydia Ko, U.S.A.’s Stacy Lewis and a great many ladies from South Korea.

FORMER WORLD NO. 1.  Tiger Woods arrived at the Greenbriar Classic in his private jet after cruising the Bahamas in his yacht.  However Tiger has not had a top 10 finish since his tie for 2nd at the 2013 Barclays Championship.  Down to World No. 258, he needs tournament starts to improve his world ranking; so low that he is ineligible for next month’s Bridgestone Invitational, which he won eight times.   But his earnings alone total well over $100 million, so there’s no need to pawn the yacht just yet.

IT’S UNUSUAL to change Swingweights from mid to long irons in a set, but the new Ping GMax Irons do just that, becoming progressively lighter from the mid irons up to the long.  Ping know that golfers likely to use the GMax lose club speed in longer shafted clubs, particularly in the long irons, so Ping made the clubs lighter to help them square the face at impact, increasing ball speed and promoting straighter shots.  Reviews have labelled them clunky, but you can’t have everything.

IN 1960 ARNOLD PALMER was “The Man.”  He had won a second Masters that year and the U.S. Open at Cherry Hills.  After 54 holes at St. Andrews he was four strokes behind the leader, Australian Kel Nagle.   As he teed off on the 17th in the final round he still trailed by two.

The infamous Road Hole was then a 483 yd. par 5.  In each of the first three rounds, Palmer was on in 2, then three putted for par. But now he had a birdie 4. When a roar went up for Palmer’s birdie 3 on the 18th Nagle was hunched over a birdie putt on the 17th. He holed it to maintain his one stroke lead, then parred the 18th to win.

Palmer lost the Open, but not his sense of humour.  His caddie Tip Anderson later told how on the first three rounds Palmer had hit a 6 iron to the 17th green.  In his desperation to catch Nagle in the final round, he hit a 5 iron onto the road behind the green.
“He made a great recovery and got a 4,” Anderson said. “Walking to the 18th tee, he says to me, ‘Tip, you’ve cost me the Open championship.’ I was stunned. ‘What have I done?’ I asked. He looked at me sternly for a moment and then he starts to laugh. ‘You gave me the wrong club all week.’ ”

Two- time Open Champion Padraig Harrington summed up Friday morning rather well. “Unfortunately the town of St Andrews drained into the 1st fairway,” he said. And what to do in such a scenario? “I snuck into one of the Tour vans and slept for an hour and a half.”

Check this out, should be worth watching tomorrow? 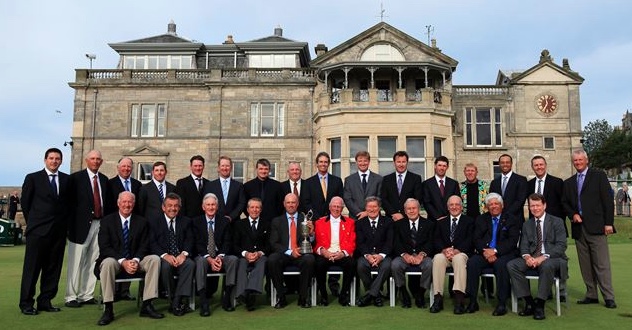 Rory McIlroy will kick himself (well he would if he could get the plaster off) for missing the Champion Golfers Ghallenge at St Andrews tomorrow; an exhibition match alongside Arnold Palmer, Nick Faldo and Tiger Woods.
The unique event will see players whose Open victories span 60 years taking part.
The draw for the historic contest on Wednesday will see 29 Champion Golfers with a combined 46 victories in golf’s oldest Championship taking part.  The four-hole challenge on the Old Course will be contested by an array of players.
In the first team, which tees off at 4.10pm, three-time Champion Golfer Tiger Woods will play with the 1998 Champion Mark O’Meara. They will be joined by the 1994 Champion Nick Price and team captain Tom Weiskopf, who won at Royal Troon in 1973.
On the 40th anniversary of his victory at Carnoustie and ahead of his final appearance in The Open, five-time Champion Golfer Tom Watson will captain the third team, teeing off at 4.32pm. Watson is joined by the 1991 and 2004 Champions Ian Baker-Finch and Todd Hamilton as well as Louis Oosthuizen, who won The Open the last time it was played in St Andrews in 2010.
At 4.43. p.m. Watson’s fellow five-time Champion Golfer, Peter Thomson, who first lifted the Claret Jug in 1954 and is celebrating the 60th anniversary of his victory at St Andrews in 1955, will captain the team comprising the 2013 and 2012 Champions, Phil Mickelson and Ernie Els, and Ben Curtis, who won in 2003.
The last two Champions from England, three-time winner Sir Nick Faldo and Tony Jacklin, who won in 1969, will be joined by Americans John Daly, who won The Open at St Andrews in 1995, and Tom Lehman, the victor at Royal Lytham & St Annes in 1996. They tee off at 5.05pm.
The day will be rounded off by a group captained by Arnold Palmer. The two-time Champion’s team would have included the 2014 Champion Golfer Rory McIlroy, and will include his fellow Irishman Darren Clarke, who won at Royal St George’s in 2011, and the 2007 and 1981 Champions Paul Lawrie and Bill Rogers.
The Champion Golfers’ Challenge will commence at 3.30pm with a performance from the Royal Marines Band Scotland. BBC Sport presenter Hazel Irvine will act as the Master of Ceremonies on the first tee.
The teams will compete on the 1st, 2nd, 17th and 18th holes of the Old Course for a prize of £100,000 which will be donated to a charity of their choice. The best individual score per team on each hole will count as the team score.
The challenge will be available to view around the world on TheOpen.com and through the official Open App and will be televised by the BBC and ESPN.
The full draw for the Champion Golfers’ Challenge

McIlroy puts his foot in it

Rory McIlroy will be out of the Scottish Championship this week and the Open as well, after rupturing an ankle ligament playing football with friends.  He will be in a cast for six weeks.  And it wasn't even foot golf!
Posted by Mick The Grip at 15:28 No comments:

JUNE ARTICLE GET STUCK IN!!!!!! (Sorry it is a bit late but I was away at Club Mediterraneo in Castellon)

IN THE BUNKER WTH MICK THE GRIP 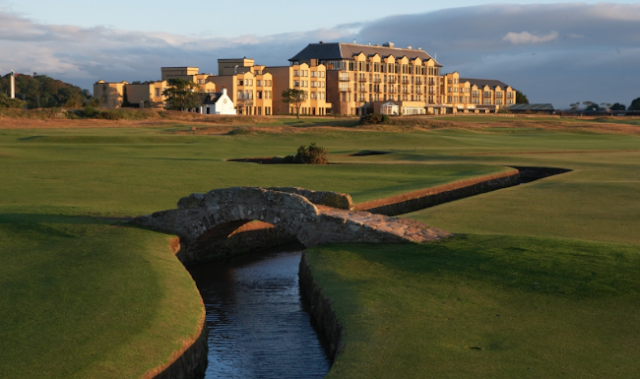 SIR NICK FALDO and Tom Watson will make their final Open appearances at St Andrews in July.   Six time major champion Faldo plans to bid farewell on the famous Swilkin Bridge spanning the first and 18th fairways, after a career which included three British Opens, one at St. Andrews.  He turns 58 on the Saturday of the Championship.
On Wednesday 15th he and Watson will be joined by Tiger, Rory and Phil Mickelson in a four hole team event; the Champion Golfers' Challenge.
St. Andrews has changed a bit over the years.   In the 15th century it was one simple track hacked through the heather.   In the 18th century the Old Course consisted of 22 holes, 11 out and 11 back, with golfers playing the same holes out and in, except for the 11th and 22nd.  Four short holes were then changed to two long ones, reducing the number from 22 to 18, and establishing today’s standard round of golf.
By the 19th century the course had become so popular that golfers playing out began to meet golfers playing in at the same hole, causing disputes and much angry waving of hickory clubs.   Tom Morris solved the problem by creating double greens; two holes on each green, with white flags on the outward holes and red on the inward.
RICKIE FOWLER silenced the critics who described him as “Overrated”  when he played the last six holes at The Players Championship in 6 under par.   In the playoff he birdied the island green 17th for the 3rd time that day.   Tour players say that the reason so many golf balls hit the drink on the 137 yd. 17th, which would normally need no more than an 8 or 9 iron, is that the stands near the tee and the trees on the bank opposite cause a funnel effect, and as the ball climbs it is hit by a very strong swirling breeze.  That’s their story anyway, it didn’t seem to bother Fowler.
DAVID LEADBETTER’S TIP which might help when facing a water hazard is to focus on a target high up behind where you want your ball to go.  Seek out anything on the horizon, like a hill or a tree, and visualise your ball soaring towards it then dropping on to your intended target.  Worth a try at La Serena, where on average a duck gets hit twice a week (and he’s getting very fed up with it.)

IAN POULTER confesses to having a mania for tidiness.  Apparently he rearranges everyone’s golf pencils to point in the same direction on the table after a game.  In fact his fellow players leave them crooked just to watch him and laugh.   He goes round straightening every ornament on his shelves, and insists all the labels on tins in his kitchen face the same way.   No wonder his wife happily waves him off to golf.

COLIN MONTGOMERIE successfully defended his Senior PGA Championship title in Indiana this month.  He won by four shots; his third Seniors major triumph after the 2014 Senior PGA and US Open.  He and Bernhard Langer have won four out of the last five Seniors Tour majors between them.   Bernhard defended his Seniors Players Championship title last week with a six stroke victory at Belmont Country Club, his fifth major on the over 50 circuit.  Monty used to be unpopular on the other side of the pond, but the Americans always love a winner, and he has mellowed with age, so they are actually getting quite fond of him.

THE TROPHEE HASSAN Tournament in Agadir is staged on the private course at His Majesty’s palace, and apart from tournament week, the only people allowed on it are his personal friends.  Just one fourball was played on the course last year.  Is there something his friends aren’t telling him?
Until next time: Happy Golfing.
Contact Mick for all your regripping and repair requirements. 638 859 475