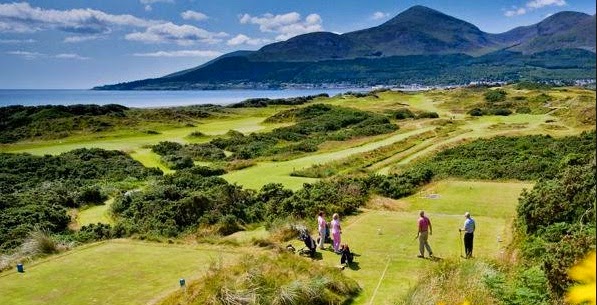 Royal County Down backed by The Mountains of Mourne.

THE 2015 IRISH OPEN at Royal County Down will mark Sergio Garcia’s first appearance in 15 years at the tournament.  The Irish Open launched his professional career as a teenager in 1999, when he edged out Angel Cabrera to win his first European Tour title at Druids Glen.

Host Rory McIlroy will head an impressive list of contestants, among them fellow compatriots Darren Clarke and Graeme McDowell.  The Irish Open has a history of repeat winners, among them Faldo and Ballesteros, so defending champion Mikko Ilonen will be hoping to carry on the tradition.

Old Tom Morris helped to design some 30 links courses, but Royal County Down is considered to be his finest effort.  The club minutes from 1889 show that Mr. Morris was rewarded with £6.50 for his trouble, which would have pleased him as he usually only got a fiver.

THE COBRA FLY Z DRIVER has been named My Golfspy’s most wanted driver for 2015.  It features Speed Channel Technology; an engineered trench around the perimeter of the face to increase ball speeds across it.  Weight has been removed from key areas to increase the size of the sweetspot, with a low, backward CG to reduce spin and increase launch.
My Golfspy reported: ‘FLY Z delivers the ultimate blend of maximum distance and forgiveness.  It’s the most complete driver on our list.’
ON JUNE 15th CHAMBERS BAY  will welcome the U.S. Open to the Pacific Northwest for the first time in its history. The links style course on Puget Sound, designed by Robert Trent Jones was constructed on a former gravel quarry, and has massive, rolling fairways, towering dunes and undulating greens.   The players, some of whom have walked the 7,742 yd. course, have given it mixed reviews, and apparently the organizers are considering placing tee boxes on slopes, which has brought an outraged response (especially from Ian Poulter, always prone to outraged responses.)  The 1st and 18th holes may be either a par 4 or par 5 on the day, depending on the unpredictable wind conditions.   Should be fun.
A CHIPPING TIP from Pitch Perfect:  Good chippers start with the shaft forward at address. This hinges the wrists and creates the angle required for a solid downward strike. After that they just have to maintain the angle through the swing. Do the same and you’ll make smooth, solid contact every time. (Oh yeah!)

RORY WAS IMPRESSIVE in the WGC Cadillac but Danny Willett’s brilliant Match Play debut was just as memorable.   28 year old Willett, from Sheffield, said afterwards he was sorry to have lost the semi final to Gary Woodland but was thrilled to have beaten Jim Furyk in the consolation match playoff and reached the World Top 40.   The interviewer, obviously having trouble with Danny’s Yorkshire accent, and not sure whether to say ‘Hard Luck or Well Done!’  just patted him on the back.

‘TOPGOLF’ LOOKS LIKE A CROSS between a bowling alley and sports bar. Players hit golf balls with sensors into huge, coloured holes that act as targets on a green.  Add a cocktail bar, loud Top 40 music and a gastropub menu and you have  the latest  sports craze.

Twins Steve and Dave Jolliffe opened the first TopGolf  in Watford in 2004.  By 2007, they had opened two more in England and three in the United States.  In 2011, they sold TopGolf for more than $28 million to private investors including Callaway.   Everything has been redesigned to cater for a younger audience, playing pool or video games while awaiting their turn.

"You're seeing a whole new group being introduced to the game, who ordinarily wouldn't go anywhere near a golf course,” says Steve Joliffe.  To be honest, we probably wouldn’t want them anywhere near it either.

Until next time: Happy Golfing.
Contact Mick for your regripping and repair requirements.