A little bit of Flag Waving


Nice one Justin!    A bogey-free final 66 holes to win the Zurich Classic in New Orleans, hitting an impressive 82%  of the fairways with his trusty Taylor Made R15 430 driver.  The 15ft birdie on the 18th that got him to 22 under and gave him a one stroke victory richly deserved the ovation.

And Well Done Lee Westwood!   Making a hat trick by winning the Indonesia Masters for the third time in Jakarta on Sunday, with a birdie on the first hole of the playoff. 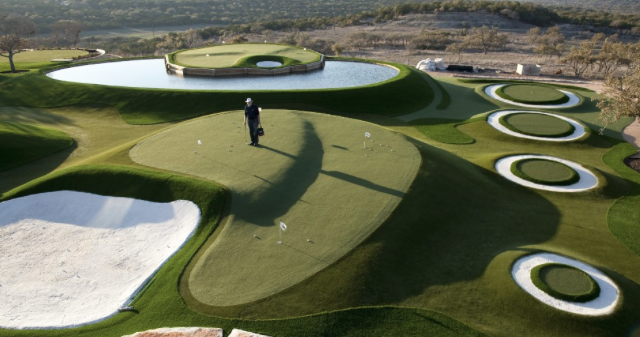 DAVE PELZ’S BACK GARDEN at Austin, Texas, is laid out like a golf course, with replica holes from TPC Sawgrass and St. Andrew’s.  Short game coach Pelz’s  students have collected over 20 majors between them, and he has patented more than 70 clubs, including the two ball putter.  He pioneered the use of statistics in the 1970s, after working for space agency NASA.

Pelz says:  “I was taught that it was a drive and a shot to the green and then you putted.  But I researched how many shots players hit. They drove the ball, then they would go for the green and miss, then hit a chip or pitch shot or two, then perhaps three putts; they had maybe five short game shots.   I worked on that.  Players may never conquer the power game, but anyone can conquer the short game with constant practice, even in the back garden.”  (He means a Texas back garden.)

QUINTA DO LAGO golf resort in Portugal is offering amateurs the chance to improve their chipping and putting at their new “Is Your Short Game Good Enough” clinics.  For around £700 the Paul McGinley Golf Academy will give you three days of intense tuition and three rounds of golf on Quinta do Lago’s  championship courses.   Much better than digging up the garden.

WITH A PACKED schedule in 2016 including the Olympics the final member of the U.S. Ryder Cup team will not be chosen until after the PGA Championship, five days before the matches begin.  Not a lot of time to build team spirit, and the U.S. team needs all the team spirit it can get.

BALTIMORE BASED CLOTHING GIANT Under Armour’s revenue soared  to 3 billion dollars last year. It is now America’s 2nd biggest sportswear retailer behind Nike. “Jordan Spieth has a 10 year contract with us, and he’s just getting started,” they crowed this week. Nike was unavailable for comment.

LAST WEEK’S RBC HERITAGE CLASSIC at Hilton Head Island, S. Carolina, is a favourite with Tour players, many of whom enjoy staying with their families at the famous Sea Pines Resort and mingling with the fans.  Arnold Palmer won the initial tournament in 1969, and the media gave glowing reports of Pete Dye's superb new links course at Harbour Town.

Unfortunately, Pete Dye had thought the tournament would be held at the Ocean Course, not his newly constructed one at Harbour Town, and his wasn’t finished.   Dye had to dash over to the course and fill the bunkers with sand, just as Palmer and his opponent were walking up the fairway.  Fortunately, neither hit a bunker shot.  The media would have had a field day.

THE PLAYERS CHAMPIONSHIP tees off on May 5th at TPC Sawgrass, with the ‘Island Green’ 17th that seems to give even the most accurate ball strikers the jitters.   The longest putt recorded on the 17th was 59 feet, 9 inches, by Bernhard Langer during the second round of the 2008 tournament.  In the 2001 tournament Tiger Woods sank a 60ft downhill putt in the third round, but because it started off the putting surface it didn’t count.  It still looked pretty incredible.

SPEAKING OF DOWNHILL PUTTS, School of Golf’s Martin Hall says: “Don't rest the putter on the grass at address. Instead, elevate the putter slightly above the grass. That will put some tension in your arms and help to take away the urge to hit the ball hard”.

PADRAIG HARRINGTON:  “I got through all eight seasons of Breaking Bad on my last China trip. When you’re staying in places like that and you can’t go out to the movies, you just sit in your suite with room service and watch the box. There’s really nothing else to do at some events.”   Life is so hard.
Until next time, Happy Golfing.
Contact Mick for all your regripping and repair requirements. Tel: 638 859 475.


HAPPY JORDAN SPEITH!  GREAT VIEWING.   HAPPY TITLEIST!  (A NEW CONTRACT COMING UP SHORTLY??????   To lose one star could be deemed as careless.  To lose two would be a catastrophe.
Posted by Mick The Grip at 12:03 No comments:

The Augusta National might not have existed were it not for a few determined individuals who had the vision to see it through during the Great Depression.  The club needed 1,800 members to be viable yet it only had 76 in 1934 when the first tournament was held.   The club was so low on cash 17 members had to chip in to pay the top finishers.
Posted by Mick The Grip at 14:12 No comments:

Battle of the Sexes

Tonight, I thought my husband was acting weird.
We had made plans to meet at a nice restaurant for
dinner.  I was shopping with my friends all day long,
so I thought he was upset at the fact that I was a bit
late, but he made no comment on it.
Conversation wasn't flowing, so I suggested that
we go somewhere quiet so we could talk.
He agreed, but he didn't say much.

I asked him what was wrong;  He said, 'Nothing.'
I asked him if it was my fault that he was upset.
He said he wasn't upset, that it had nothing to do
with me, and not to worry about it.
On the way home, I told him that I loved him.
He smiled slightly, and kept driving.
I can't explain his behaviour. I don't know why he
didn't say, 'I love you, too.
When we got home, I felt as if I had lost him
completely, as if he wanted nothing to do with me
anymore.  He just sat there quietly, and watched TV.
He continued to seem distant and absent.
Finally, with silence all around us, I decided to go
to bed.  About 15 minutes later, he came to bed.
But I still felt that he was distracted, and his thoughts
were somewhere else.  He fell asleep; I cried.
I don't know what to do.  I'm almost sure that his
thoughts are with someone else.
My life is a disaster.
Husband's Journal:

Not a lot of people know that!

In 1943, Augusta was being used as a Turkey and cattle farm to aid the country’s war effort. At the time turkeys and cows generated more money than golf and soon prisoners of war were hired to work on what was left of the golf course after cows ate most of its valuable flowers.
Posted by Mick The Grip at 16:48 No comments: