The inaugural “Royal British Legion Challenge Trophy” was held at Vistabella Golf on Saturday 20th September.  55 Players took part, all keen to raise money for the 2014 Poppy Appeal.  The event was an individual Stableford competition, and there were prizes for first second and third in three divisions, two nearest the pin prizes and eight overall prizes for the eight best scores on the day.

The winners were as follows;

Nearest the pins were won by Pat Coyne and Ian Ingledew.

The strongest golfer (propping the rest up) was Sid Avery.  Sid won a golf cap signed by David Leadbetter, and we hope that when he wears it  all those powerful thoughts from David will assist in improving his game.

The success of a day like today depends on a lot of people.  I would particularly like to thank Pablo Riestra for presenting Vistabella golf course in such fantastic condition, Mike Probert from Costa Blanca Green Fees for his assistance in the set up, help with the check in and the cards, and Phil Brigham of Torre Golf for supplying so many players for this event.  In addition, the golf courses of Alto Real La Marquesa Vistabella Lorca and Poniente deserve thanks for providing green fees as prizes.  Individual prizes were donated by Neil O’Donoghue, Merve Evans and Pablo Riestra.  The end result was that the grand total of €711 was raised.

My thanks to you all on behalf of the Royal British Legion.  Mick the Grip. 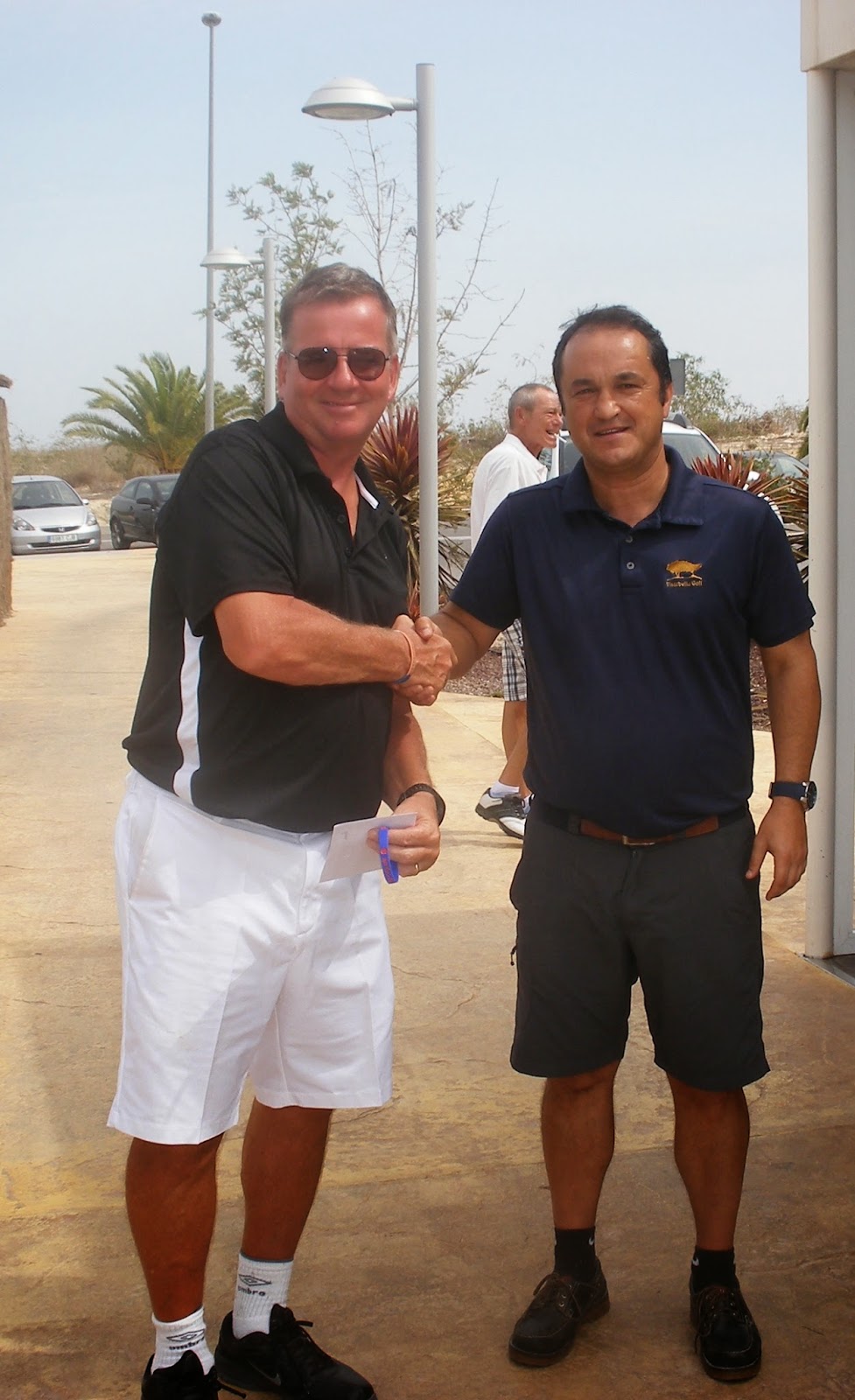 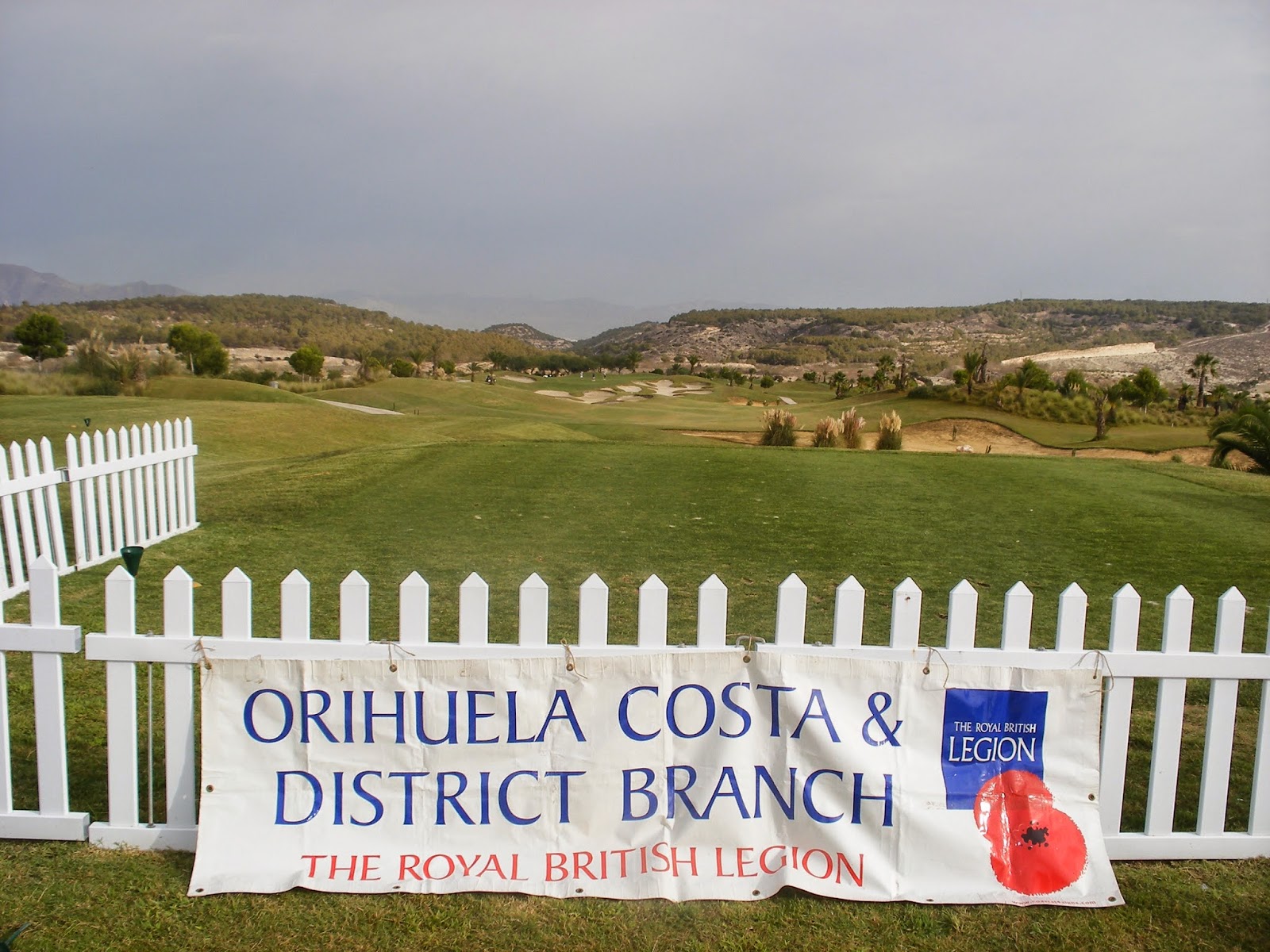 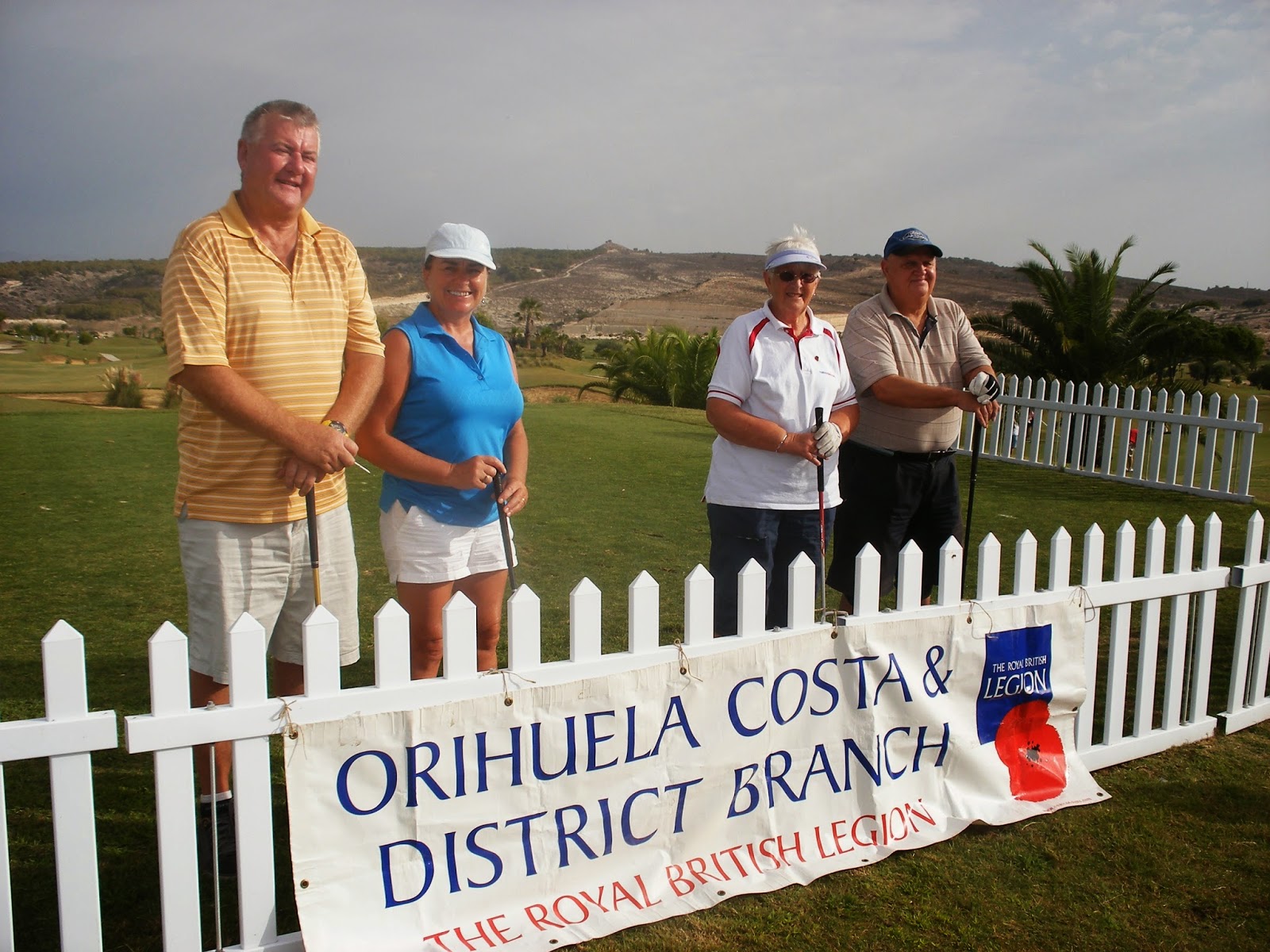 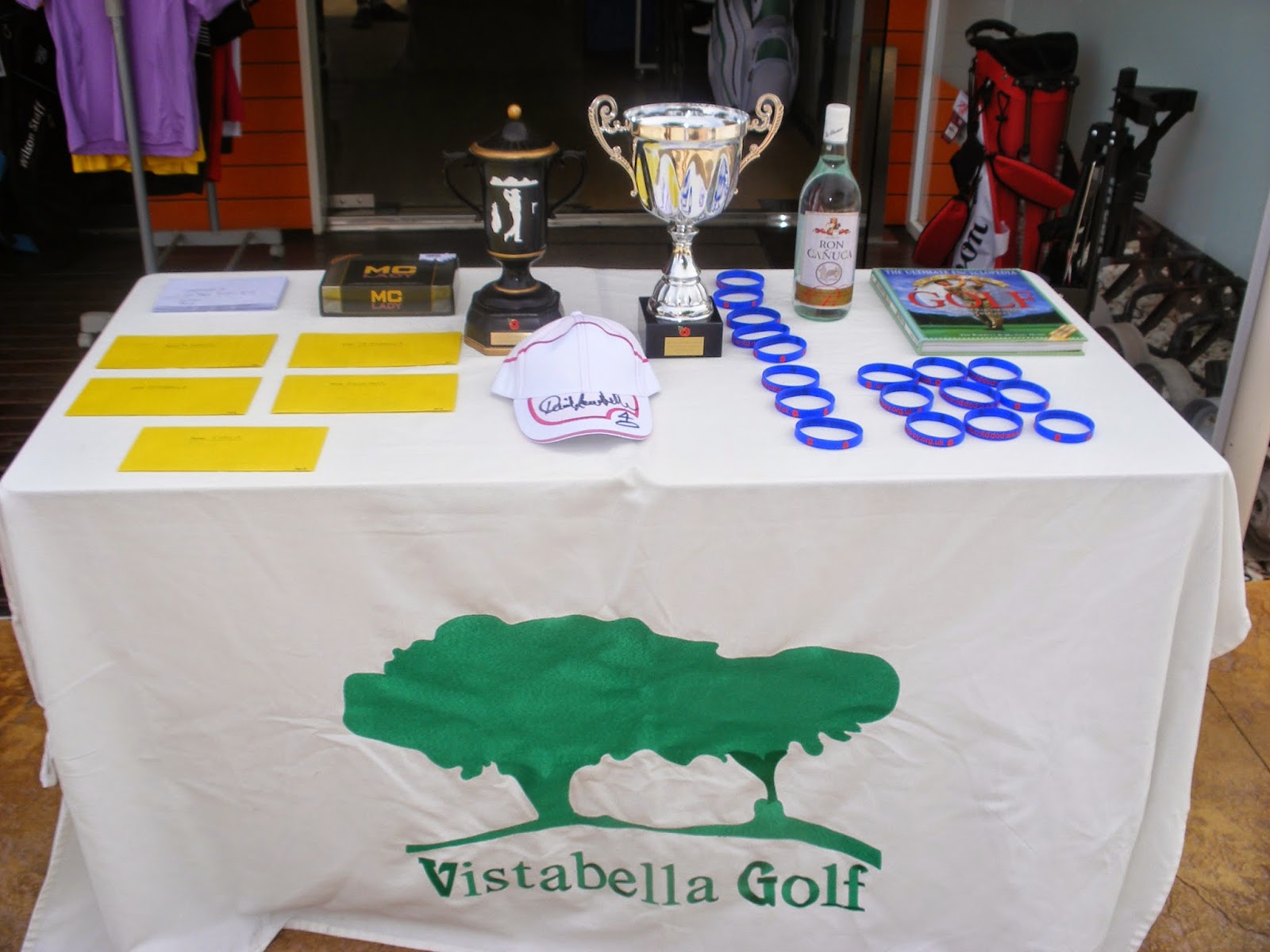 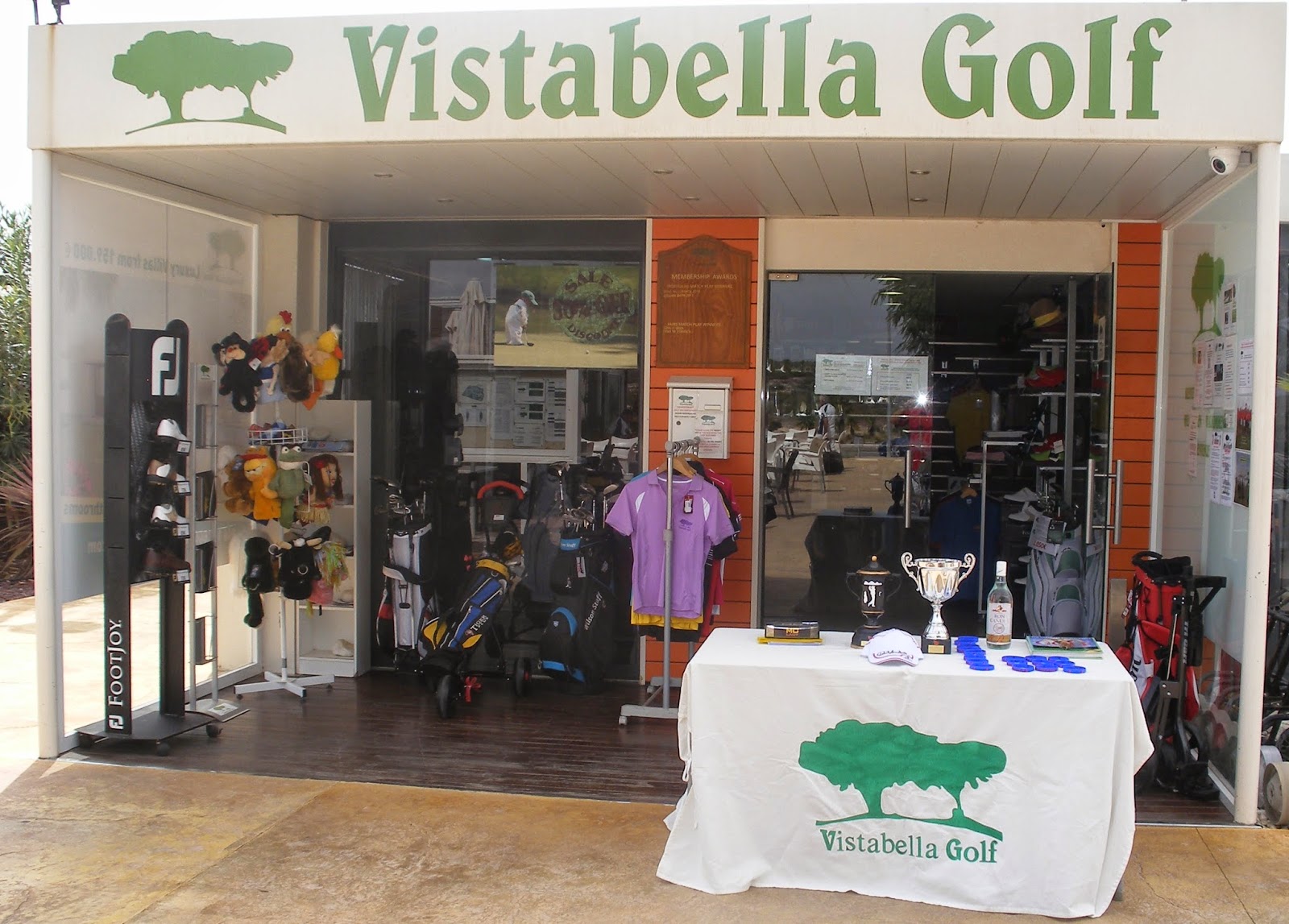 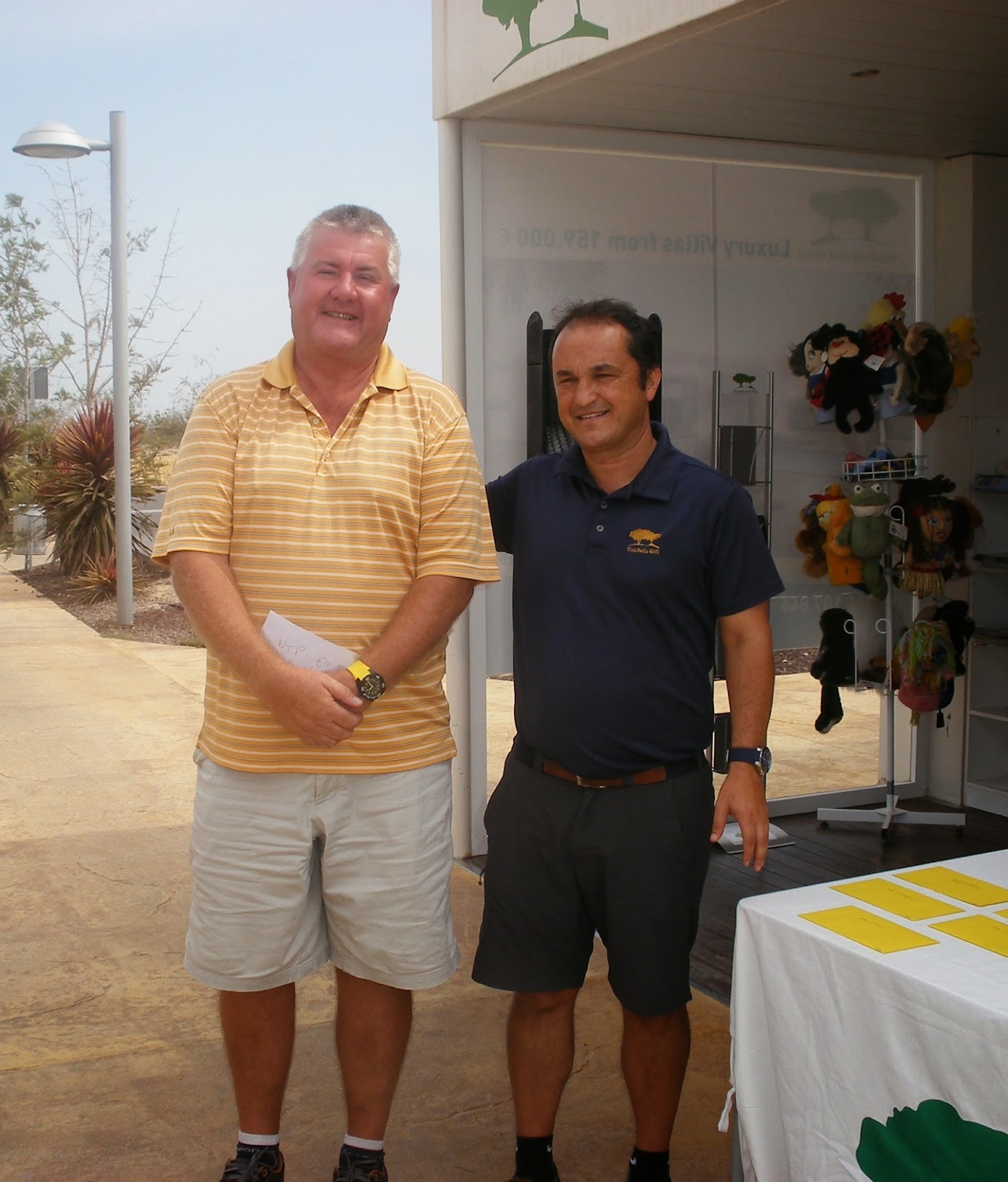 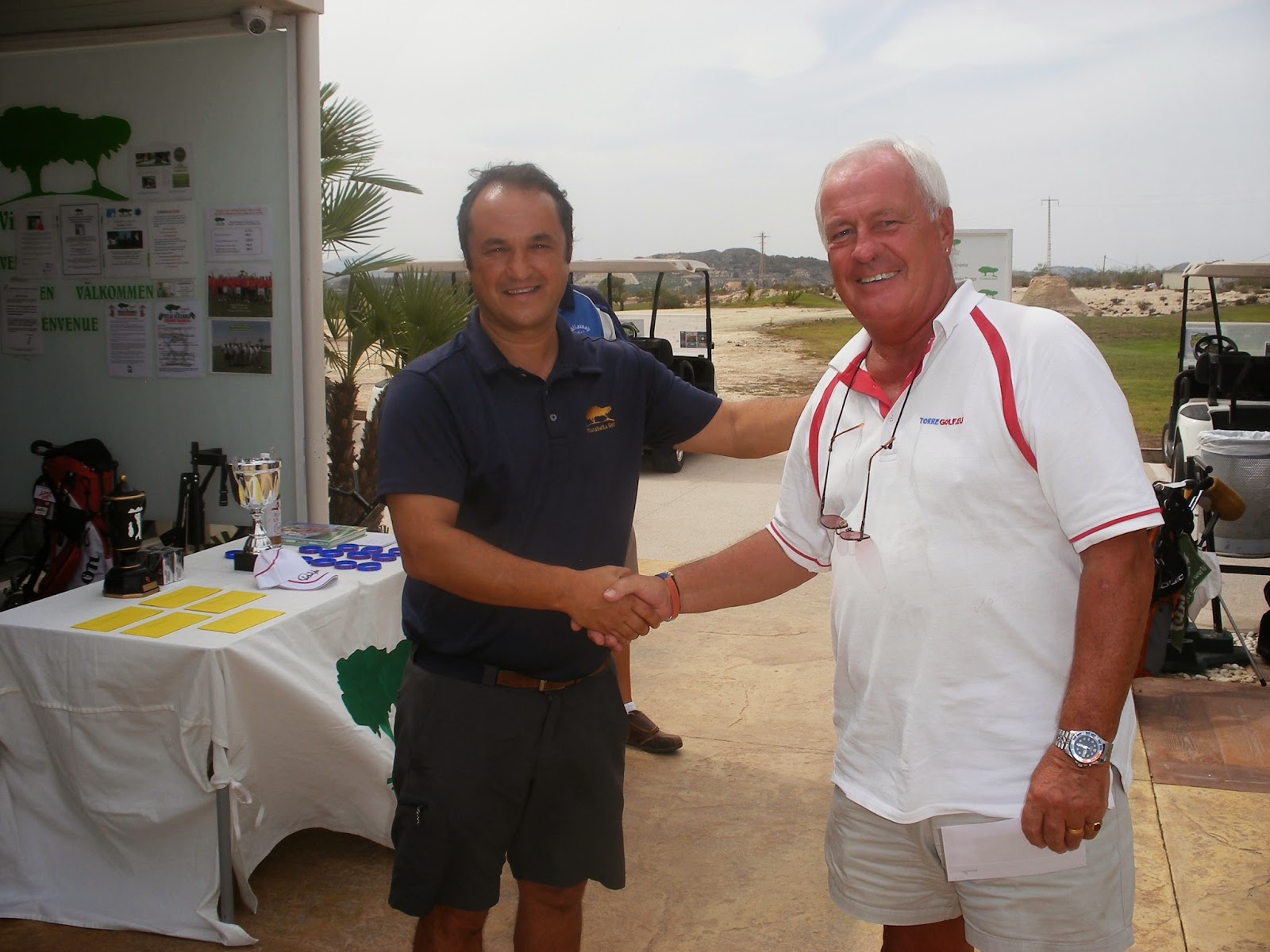 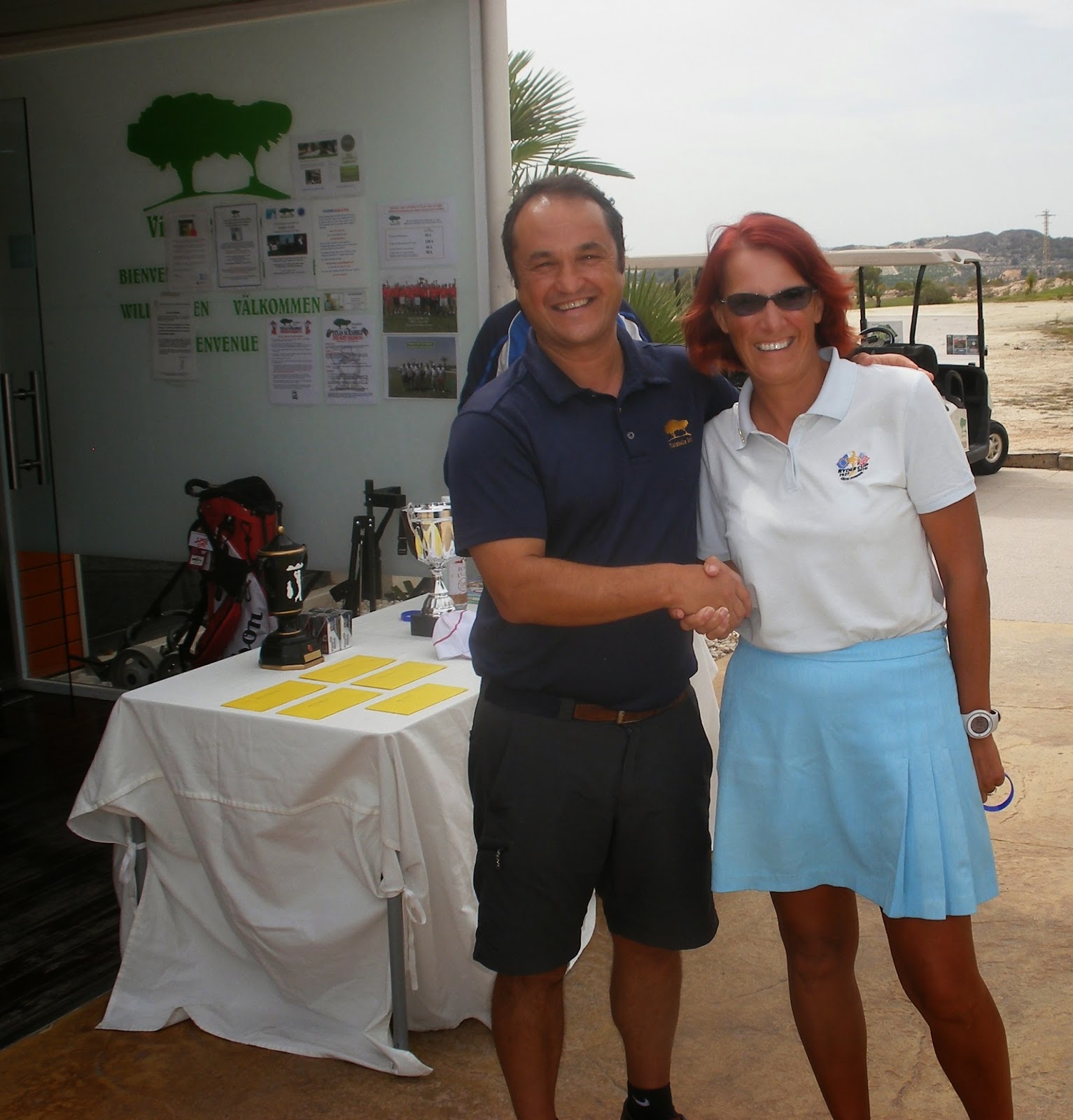 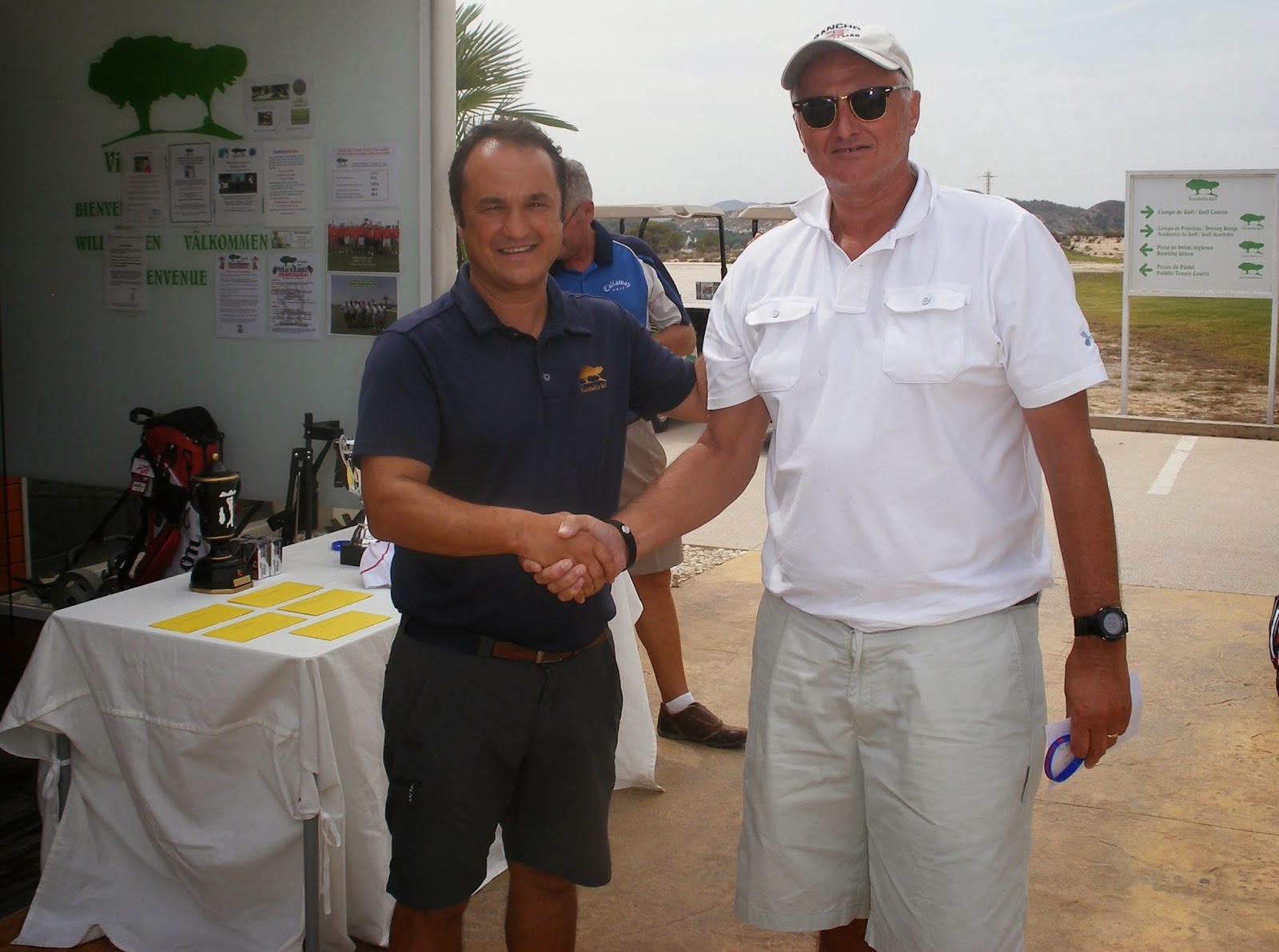 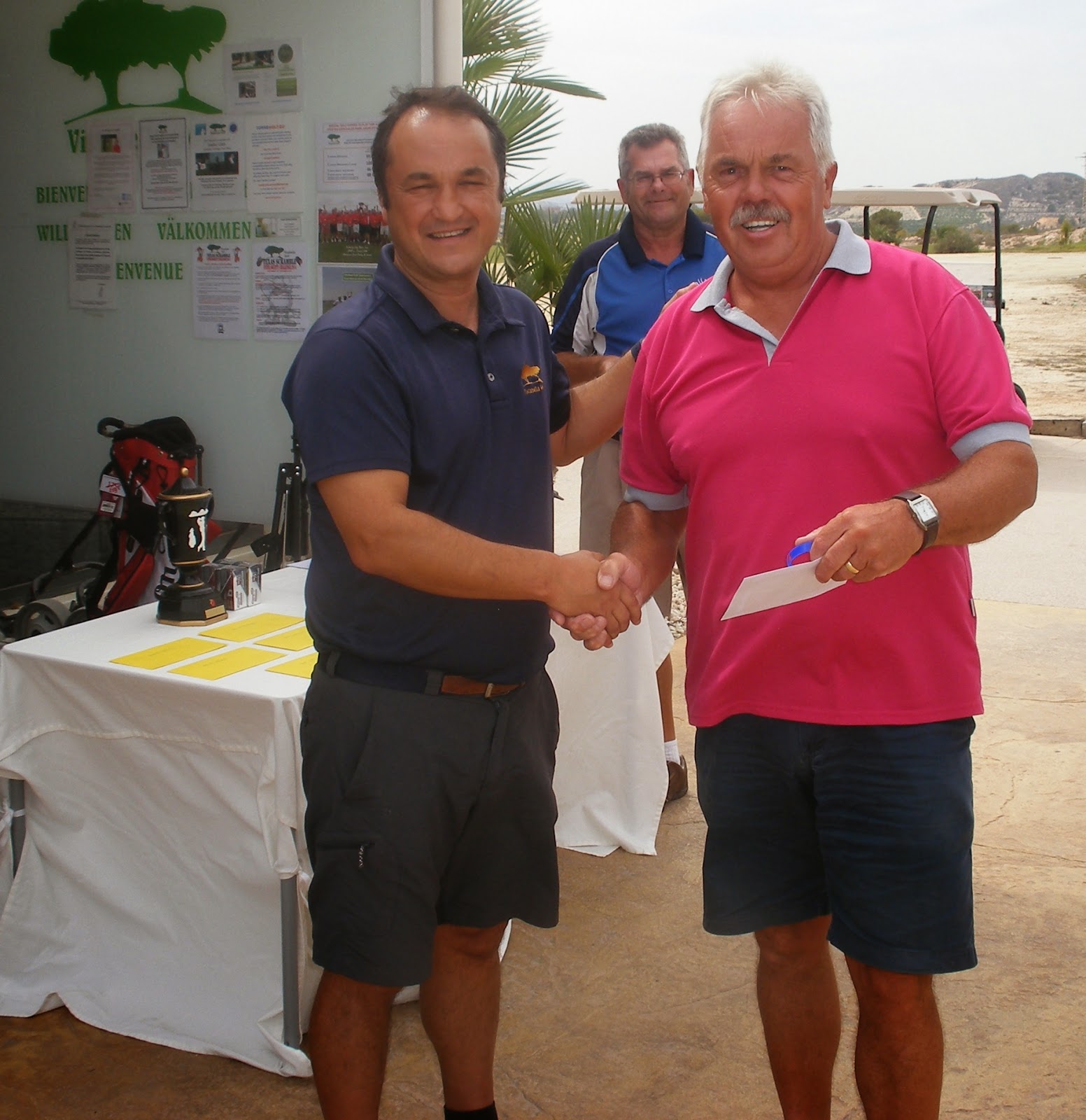 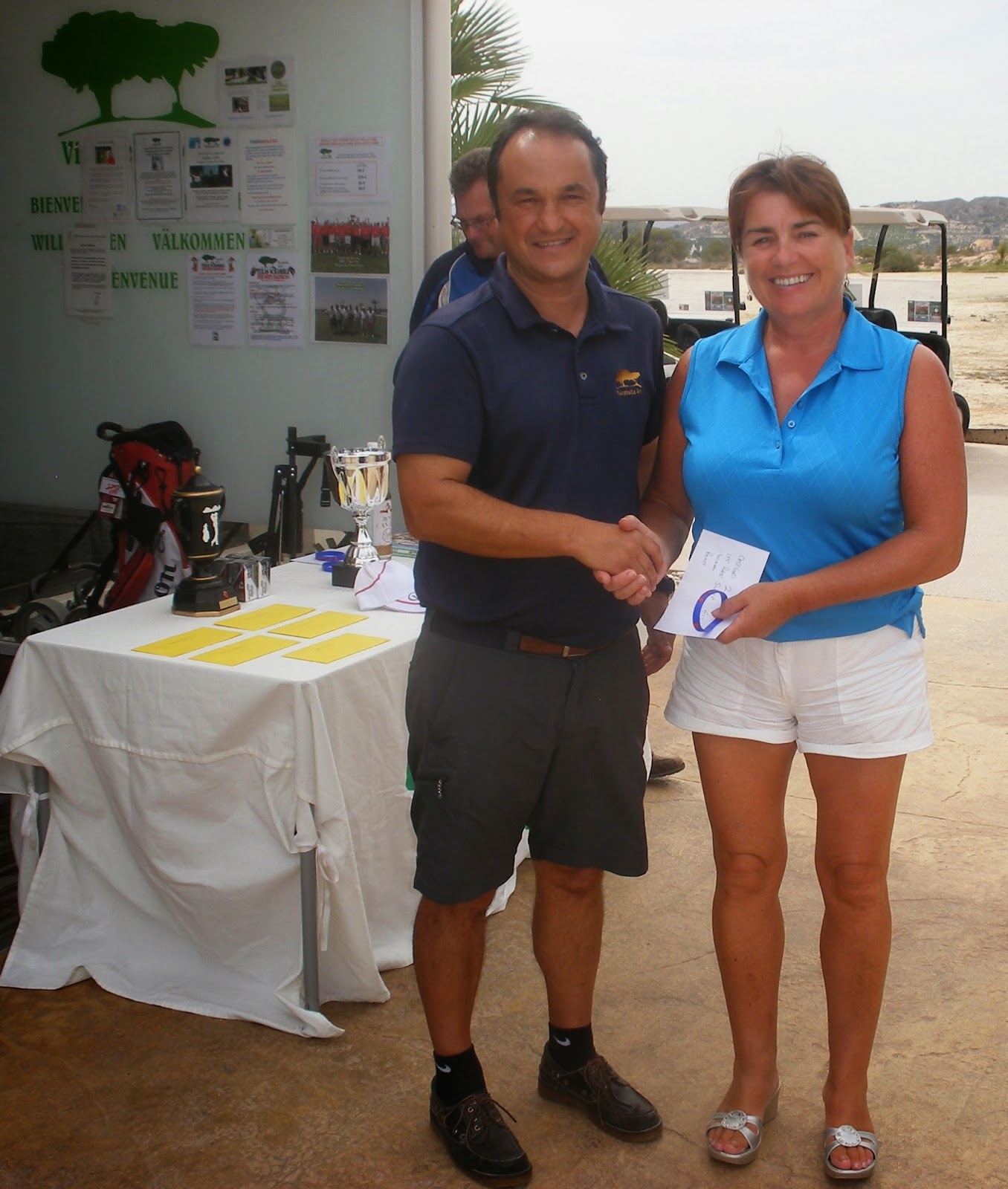 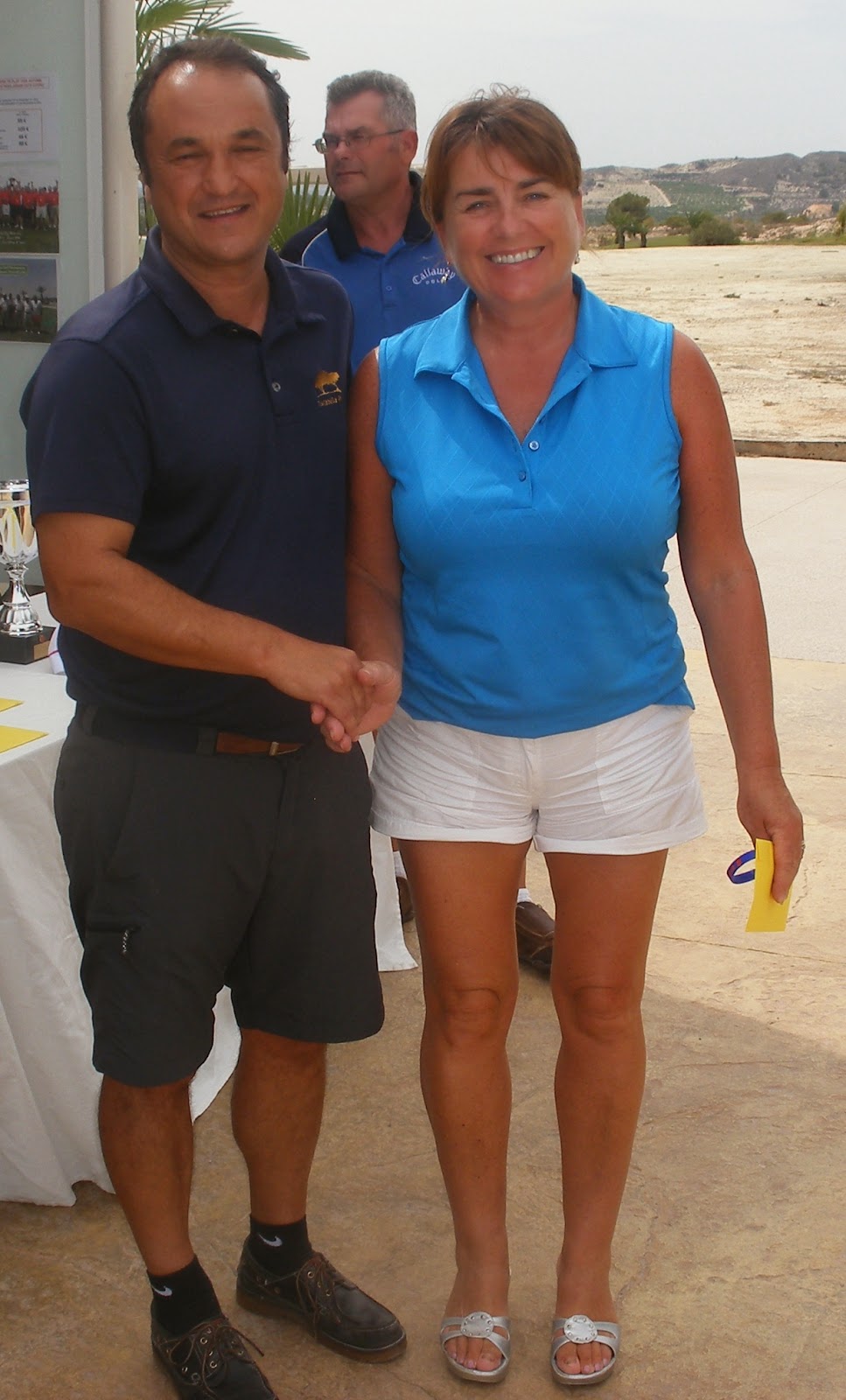 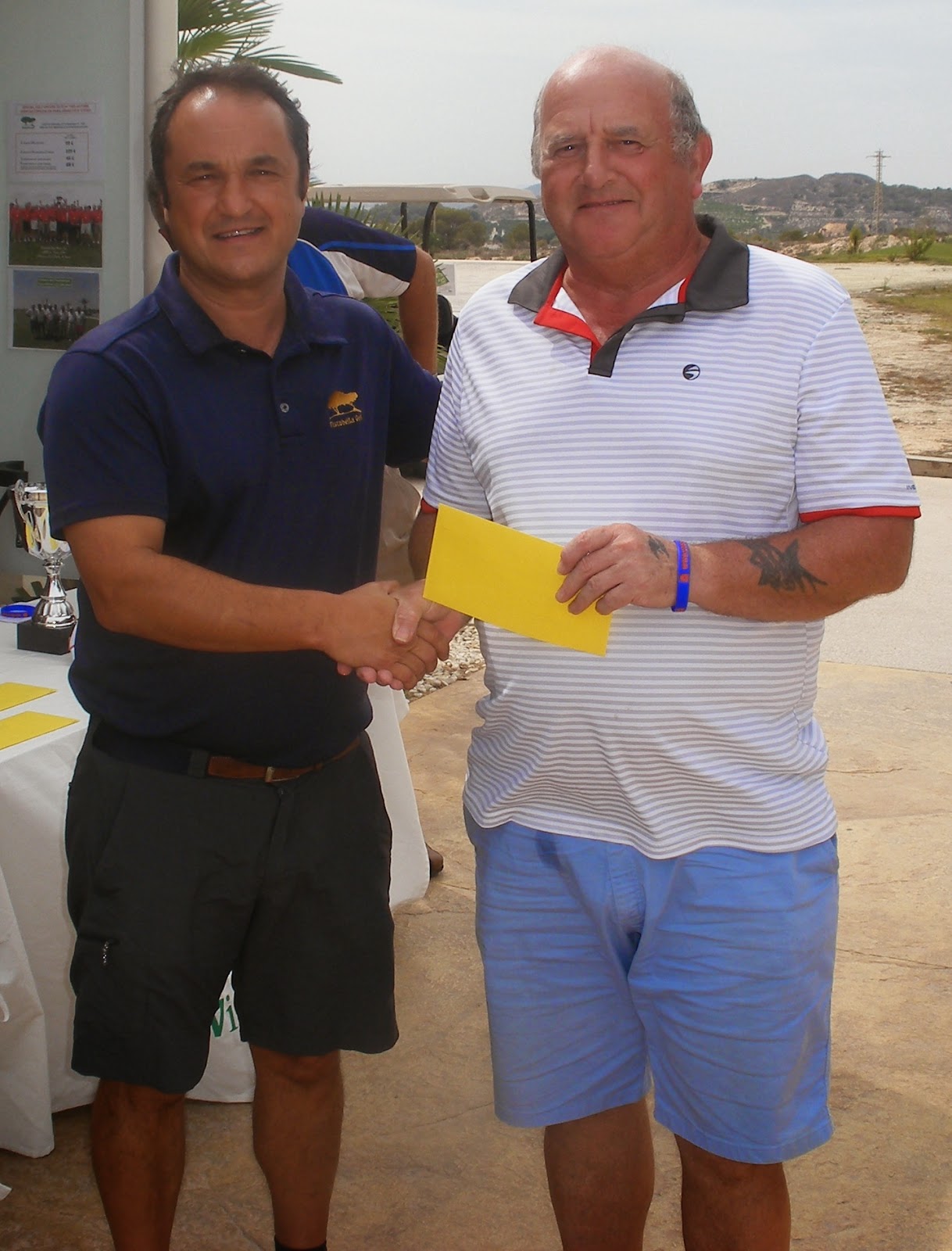 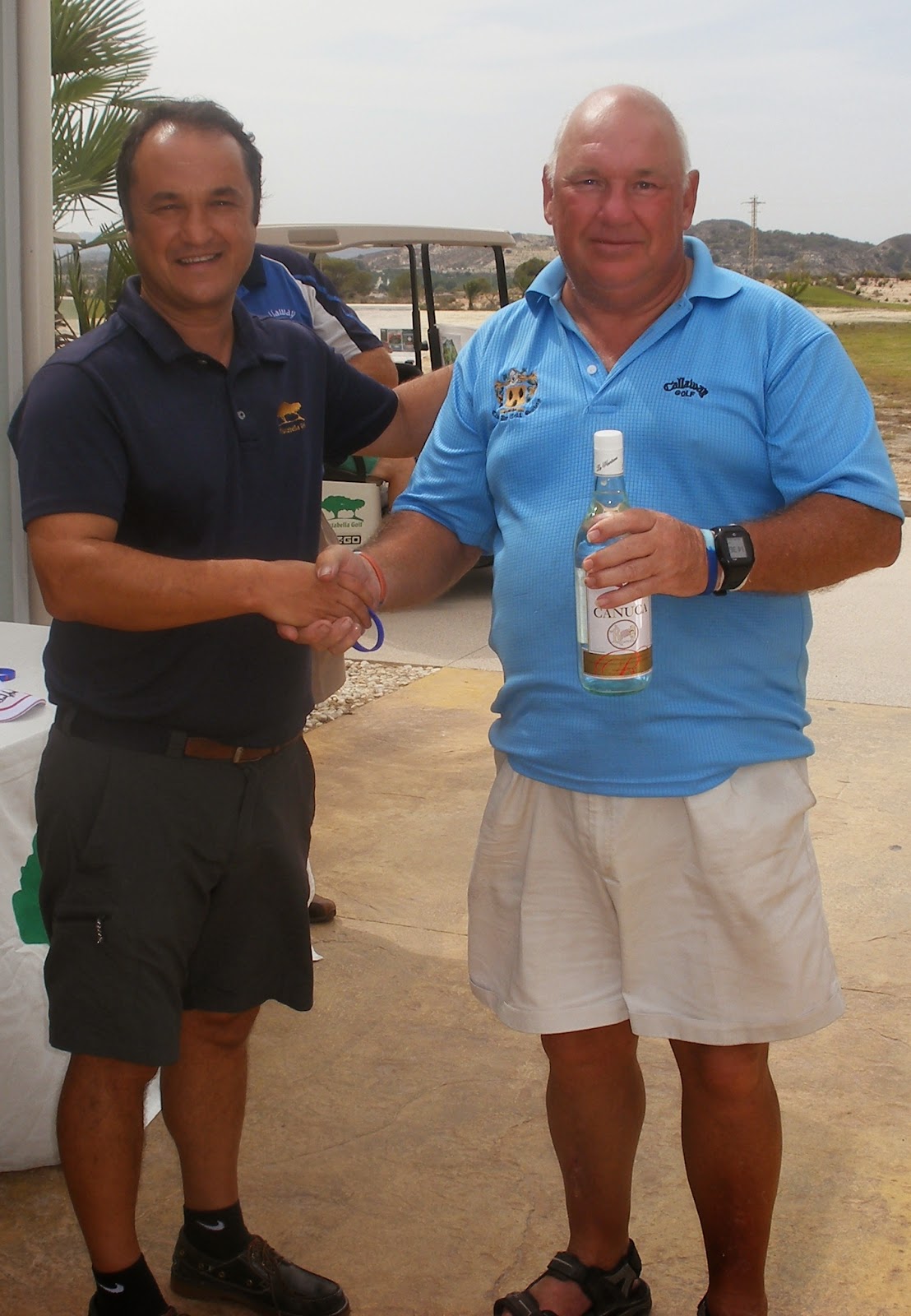 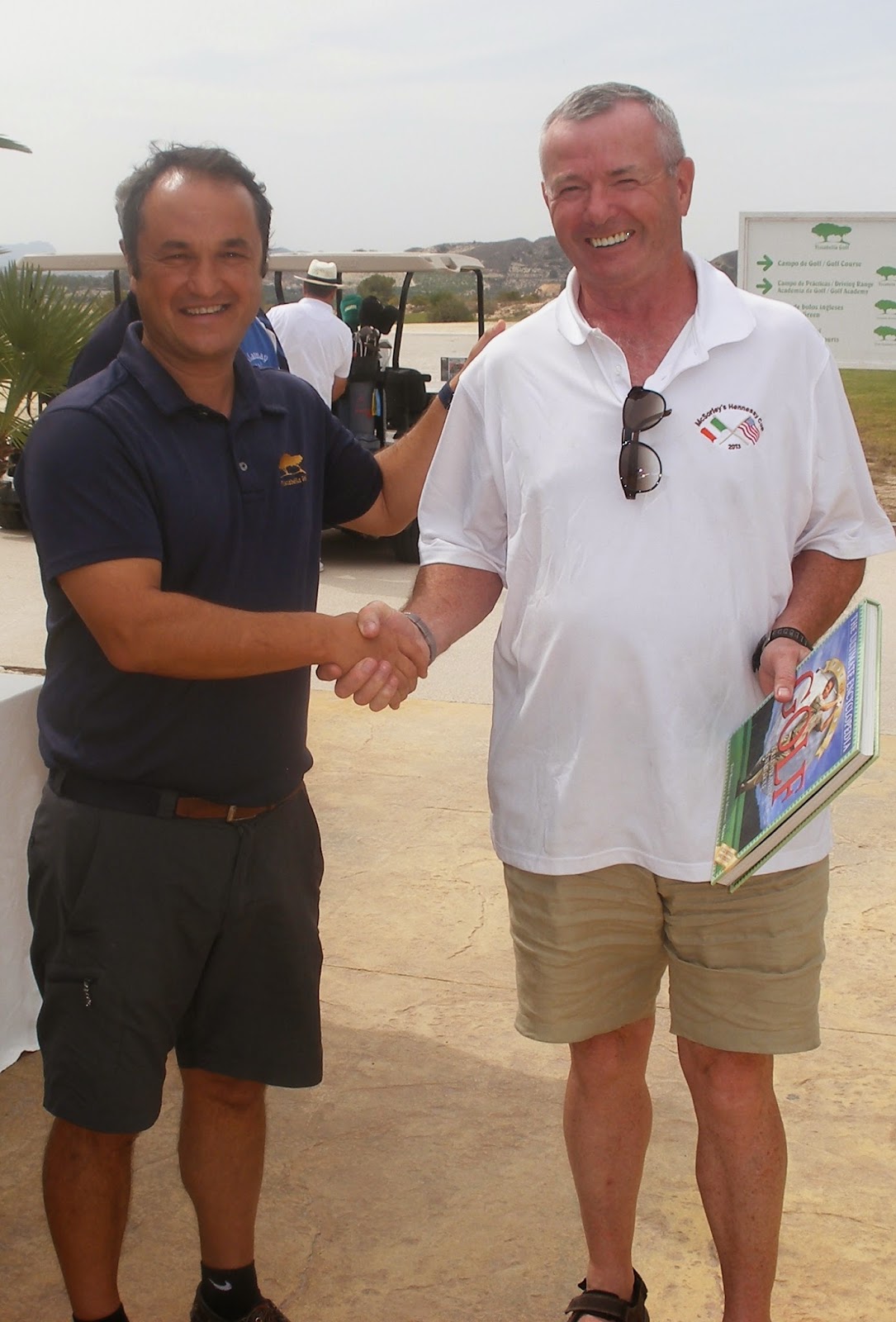 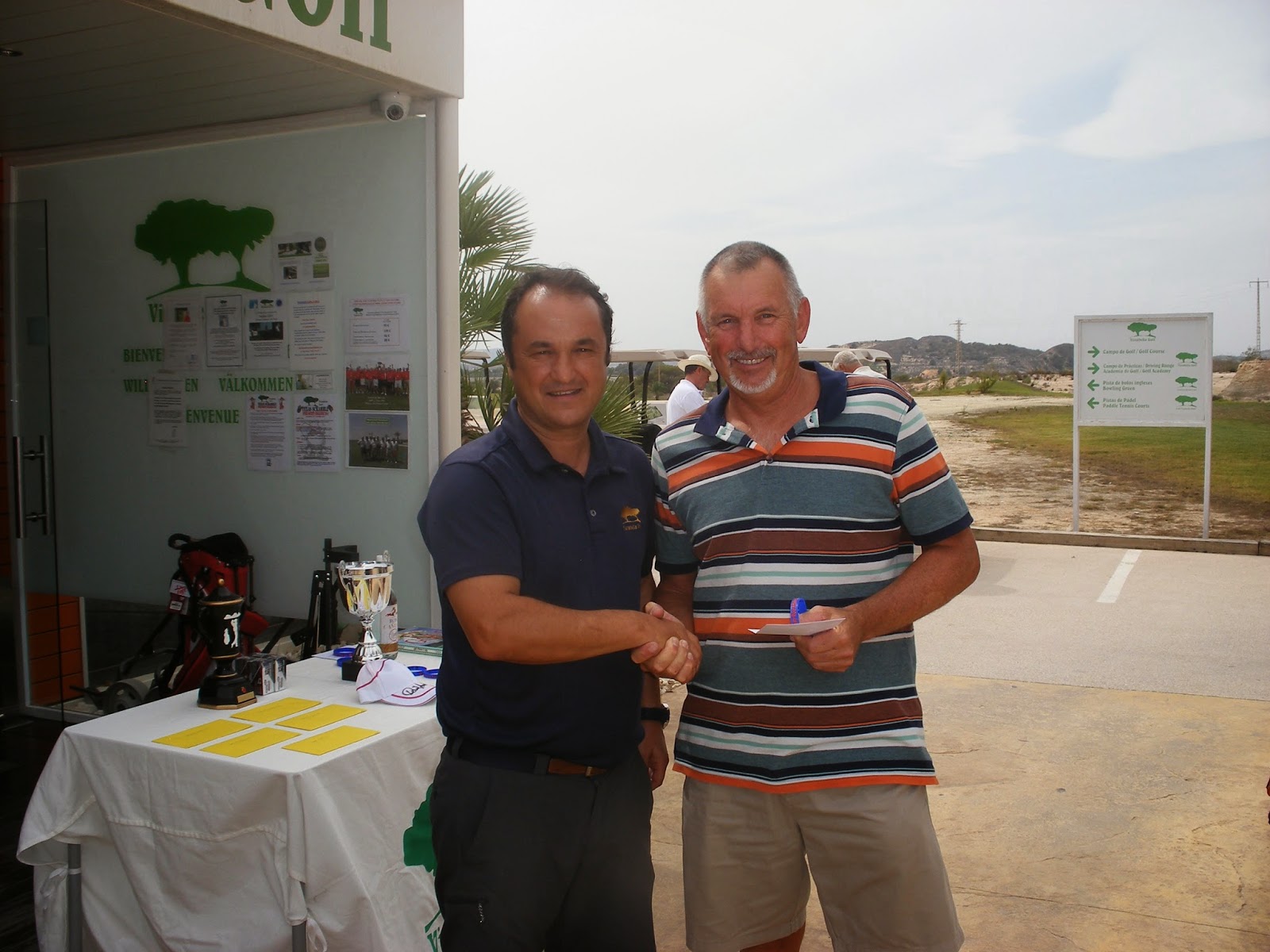 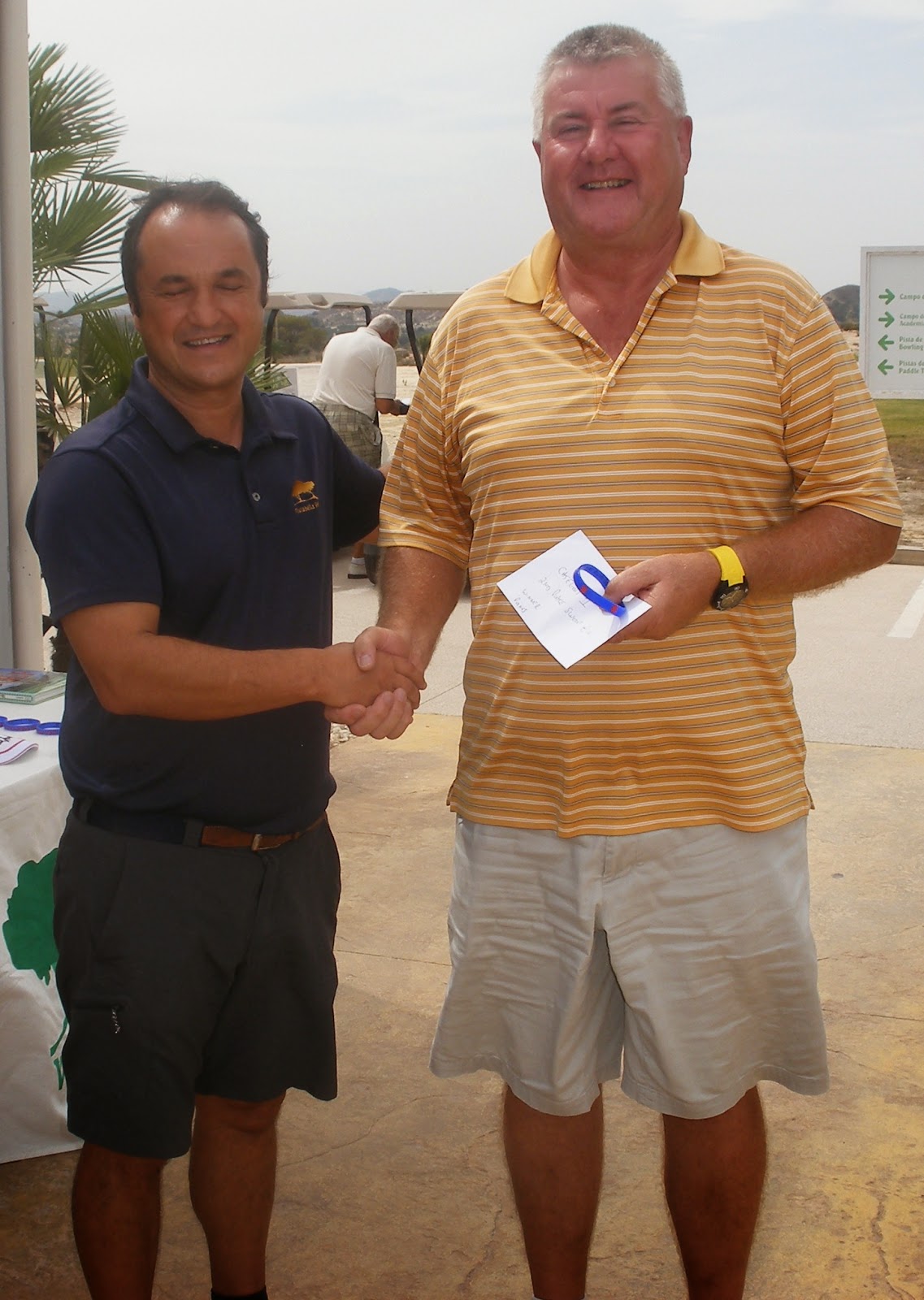 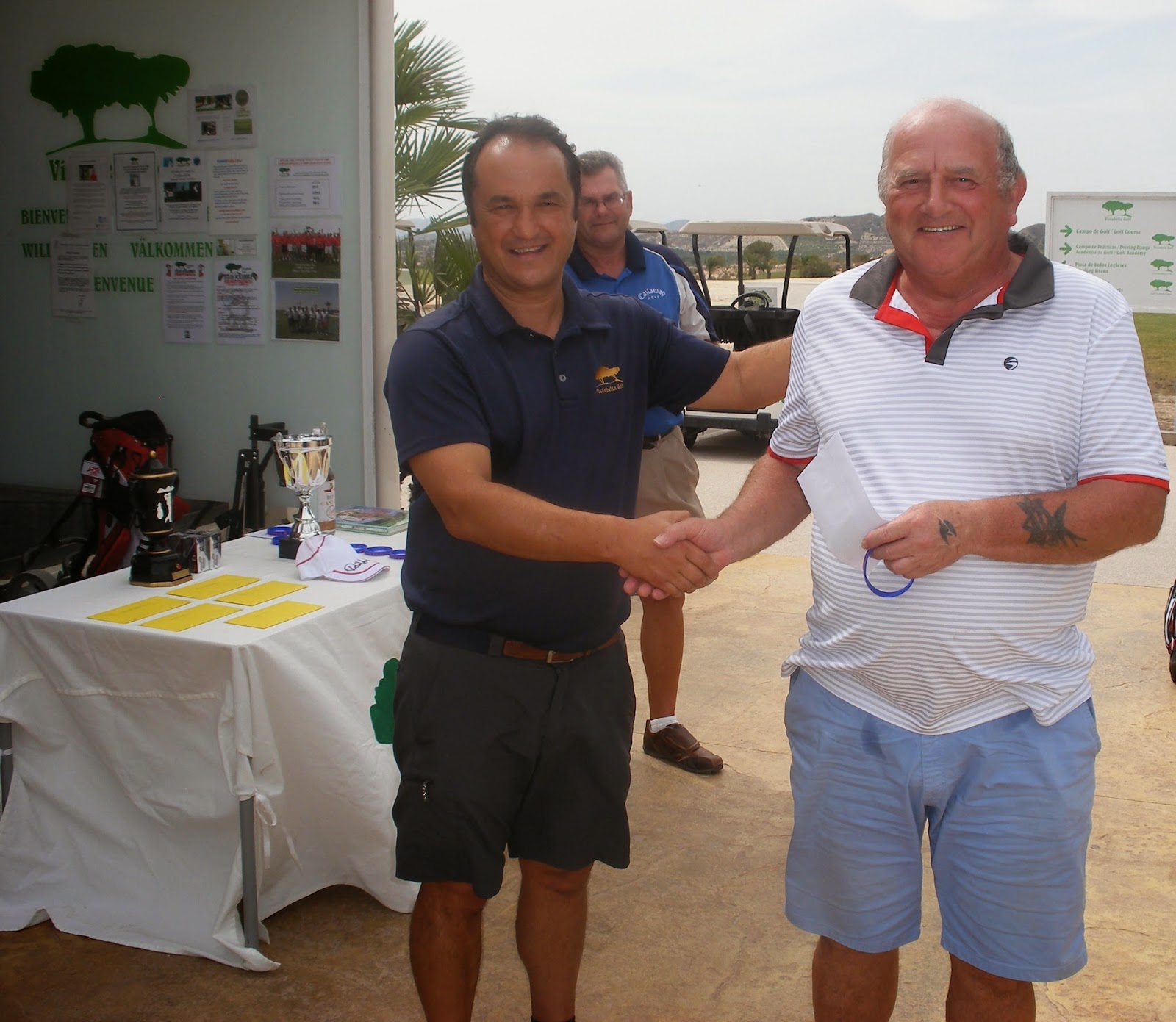 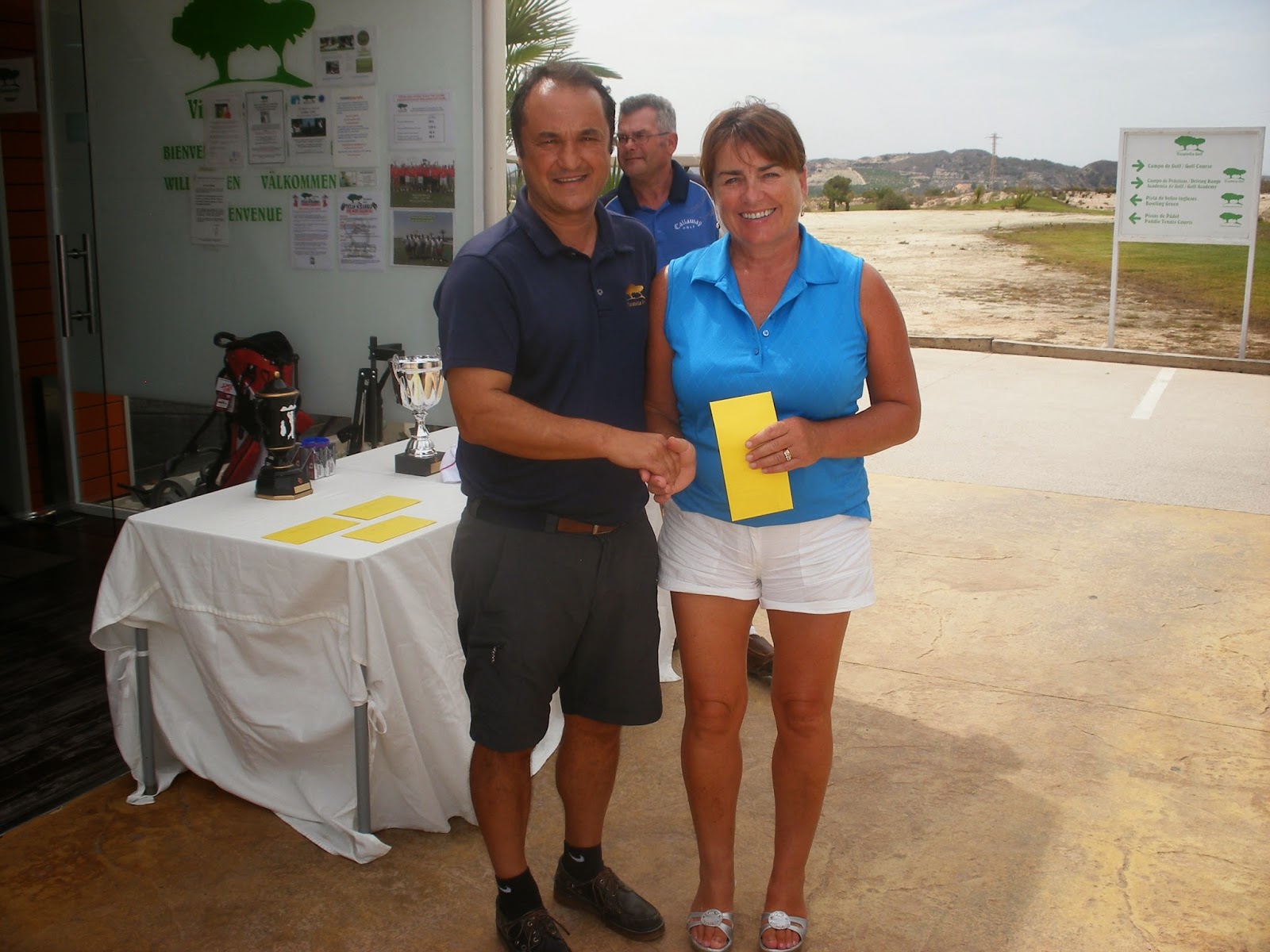 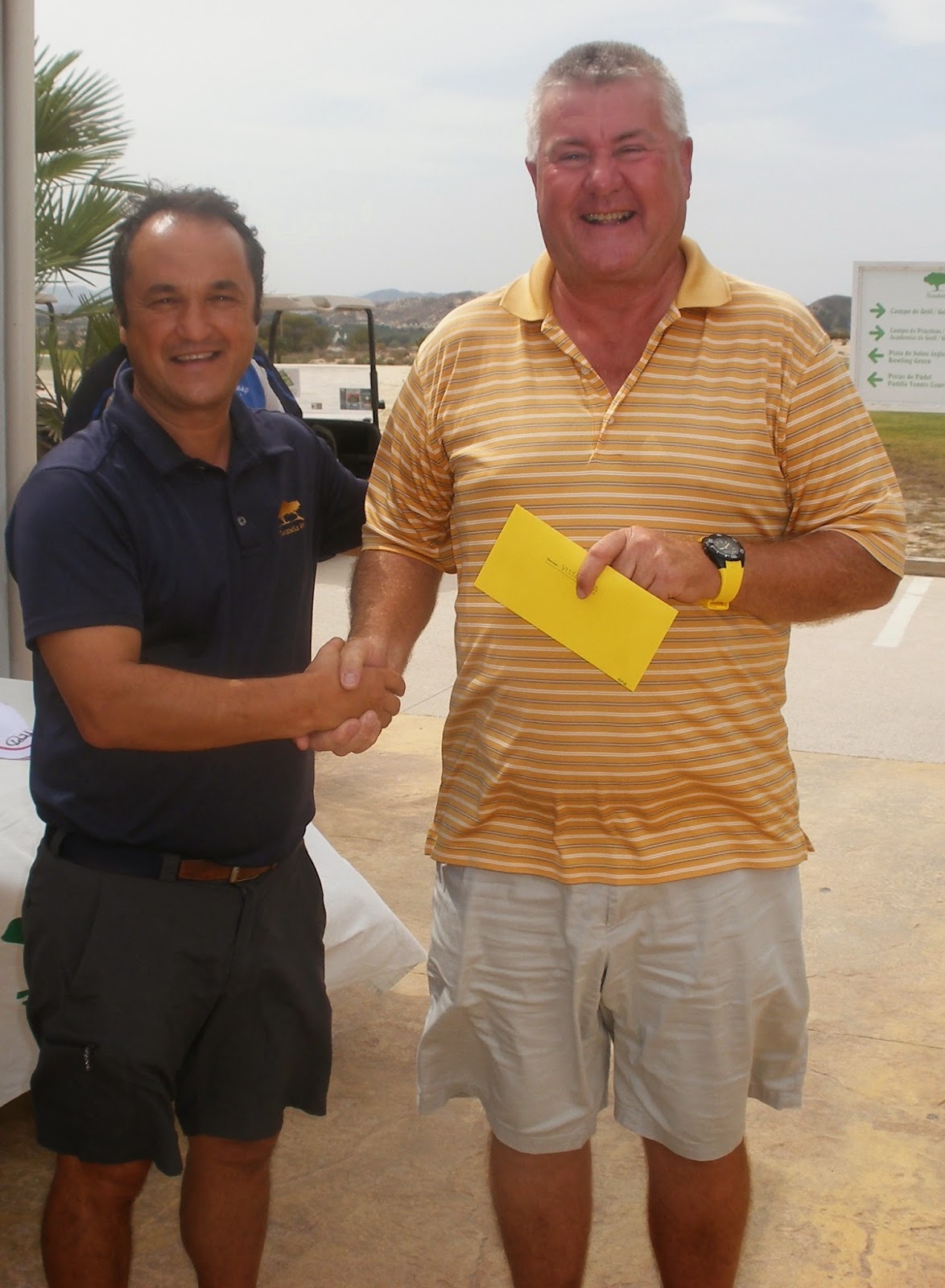 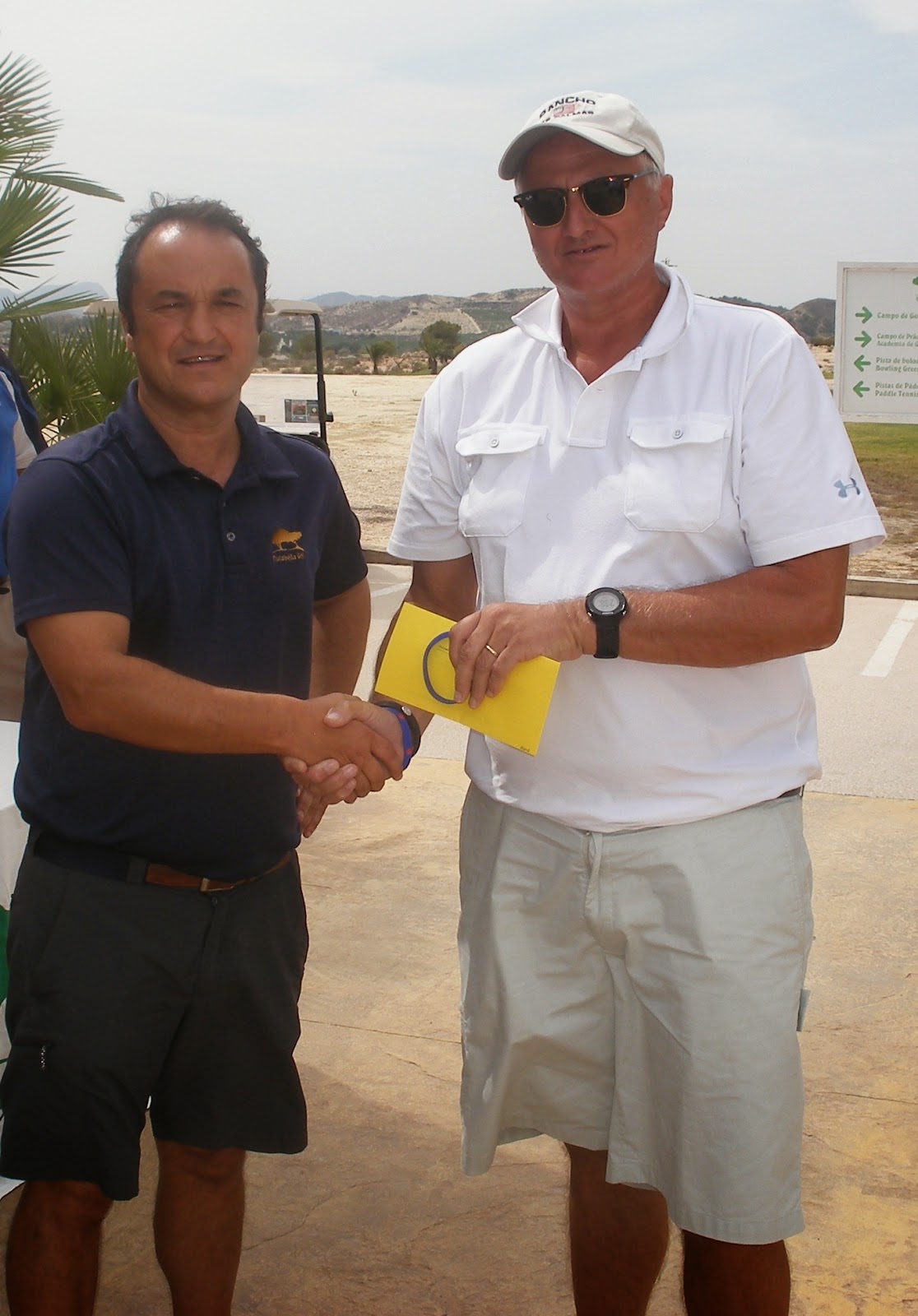 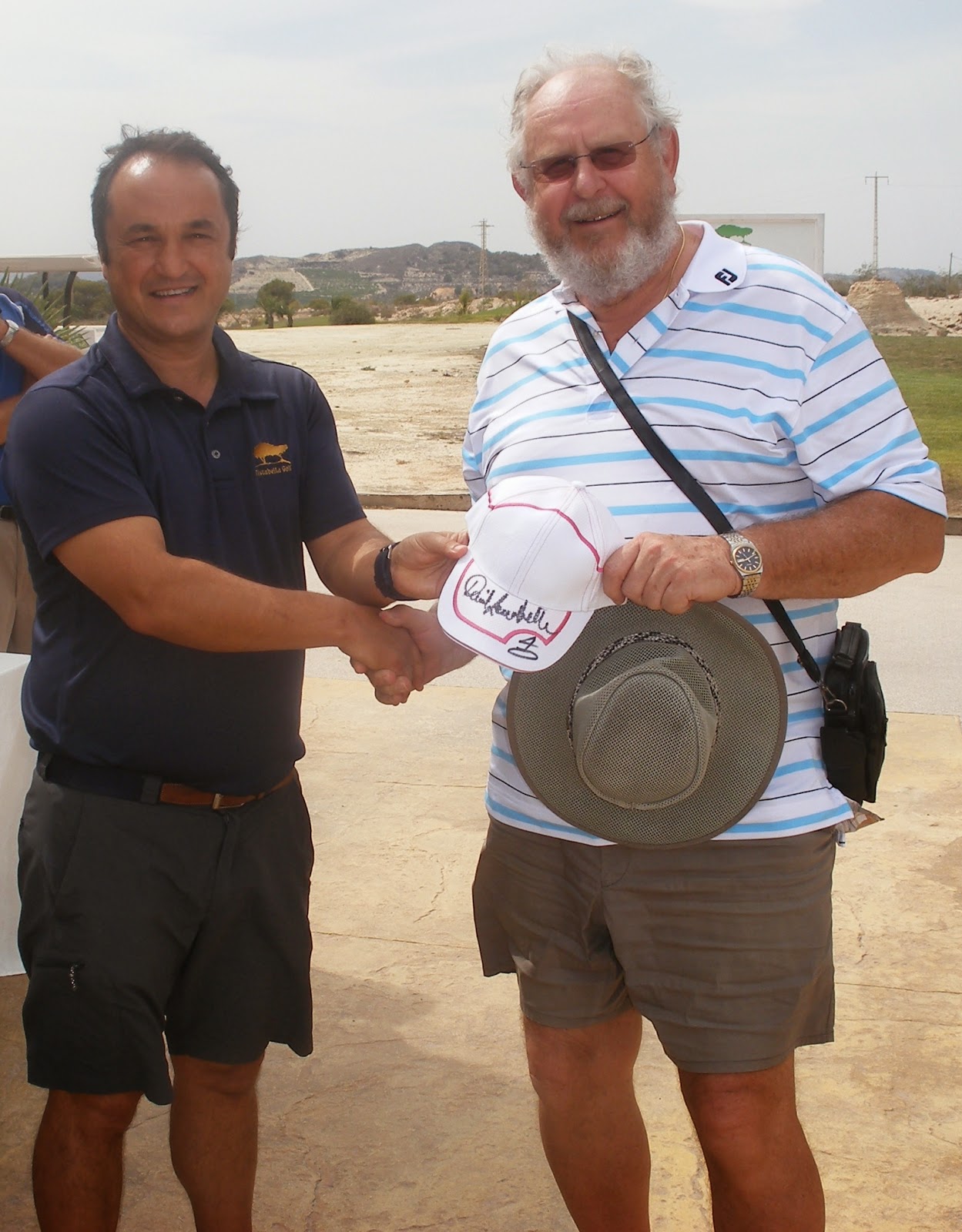 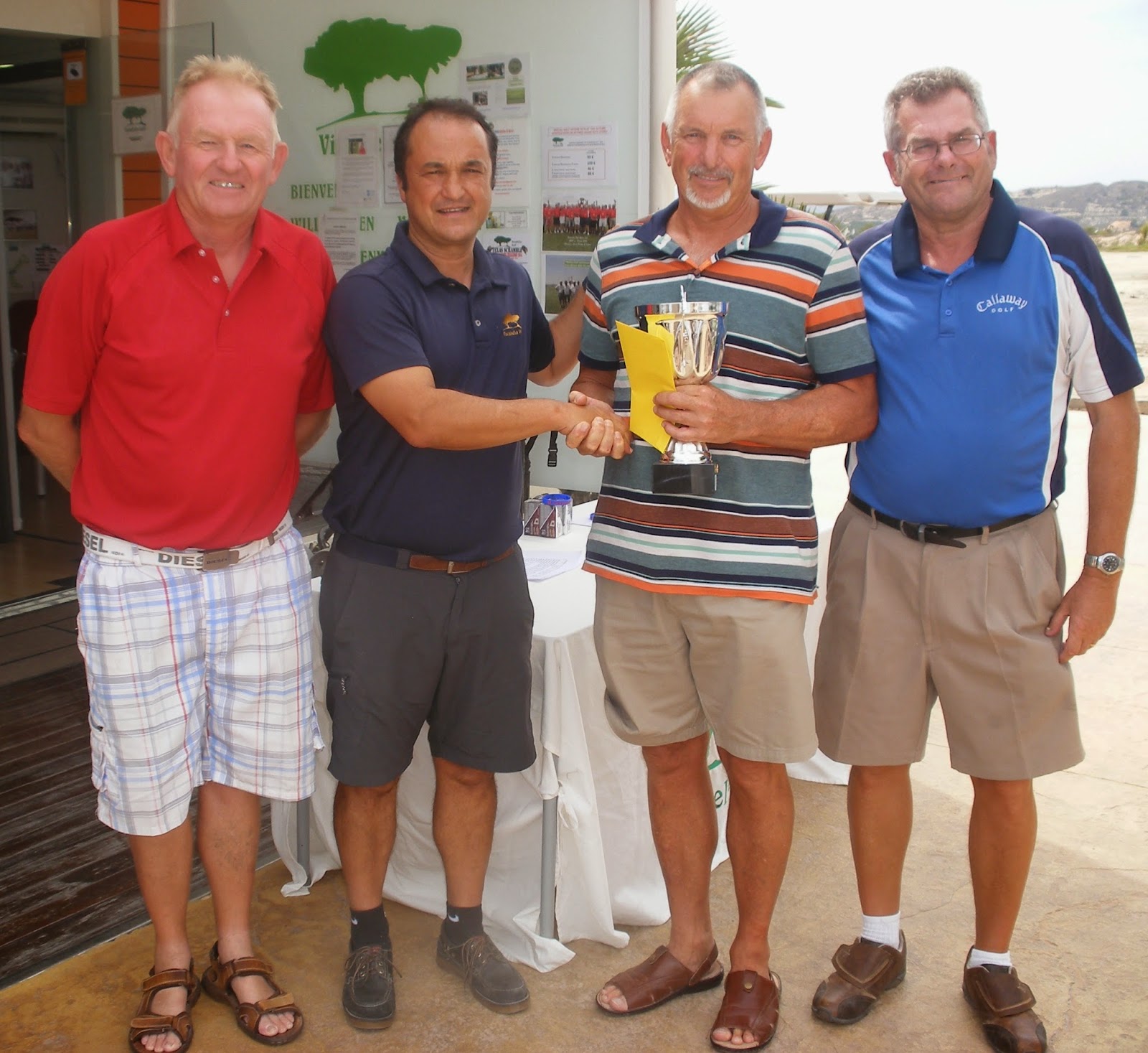 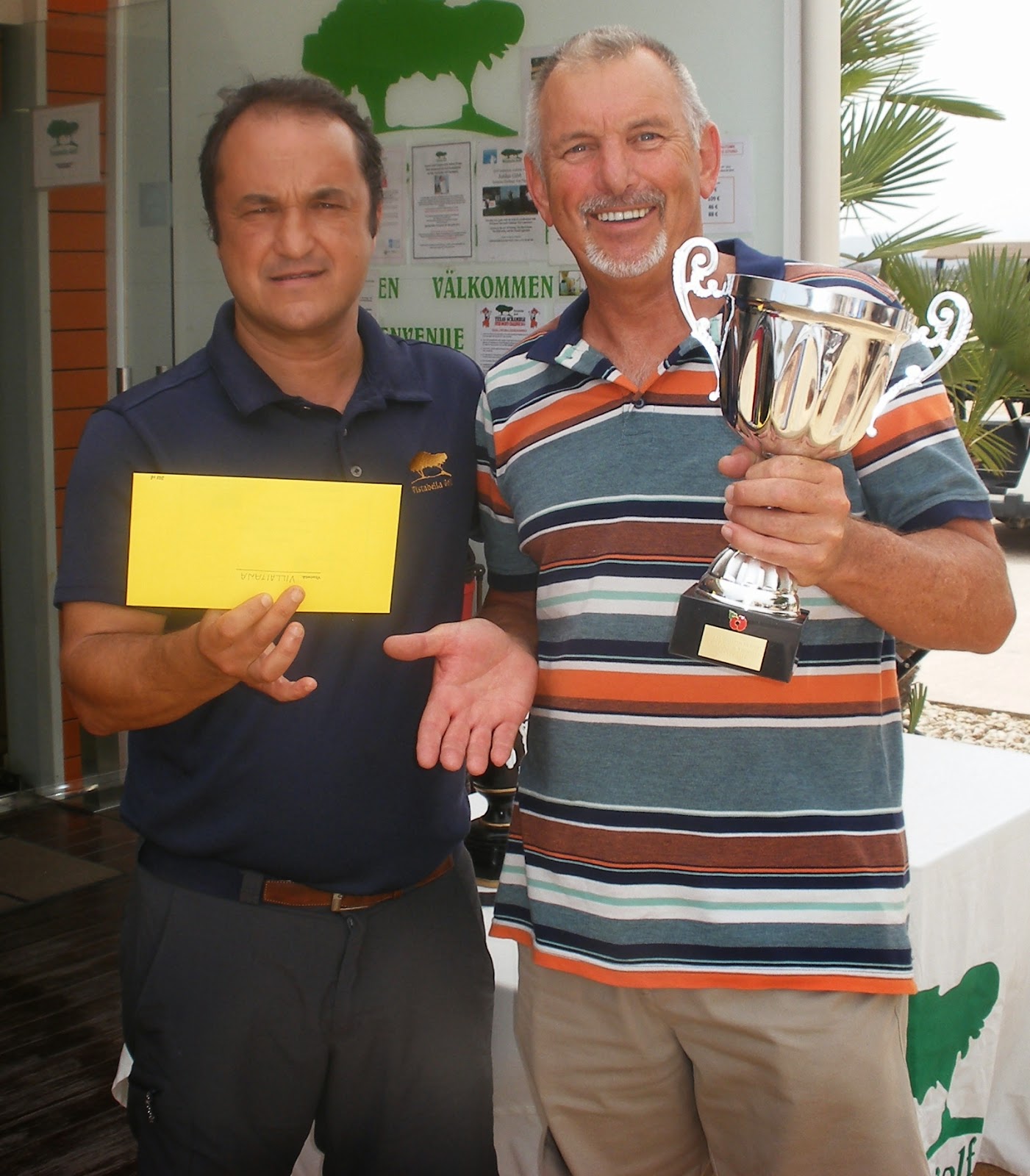 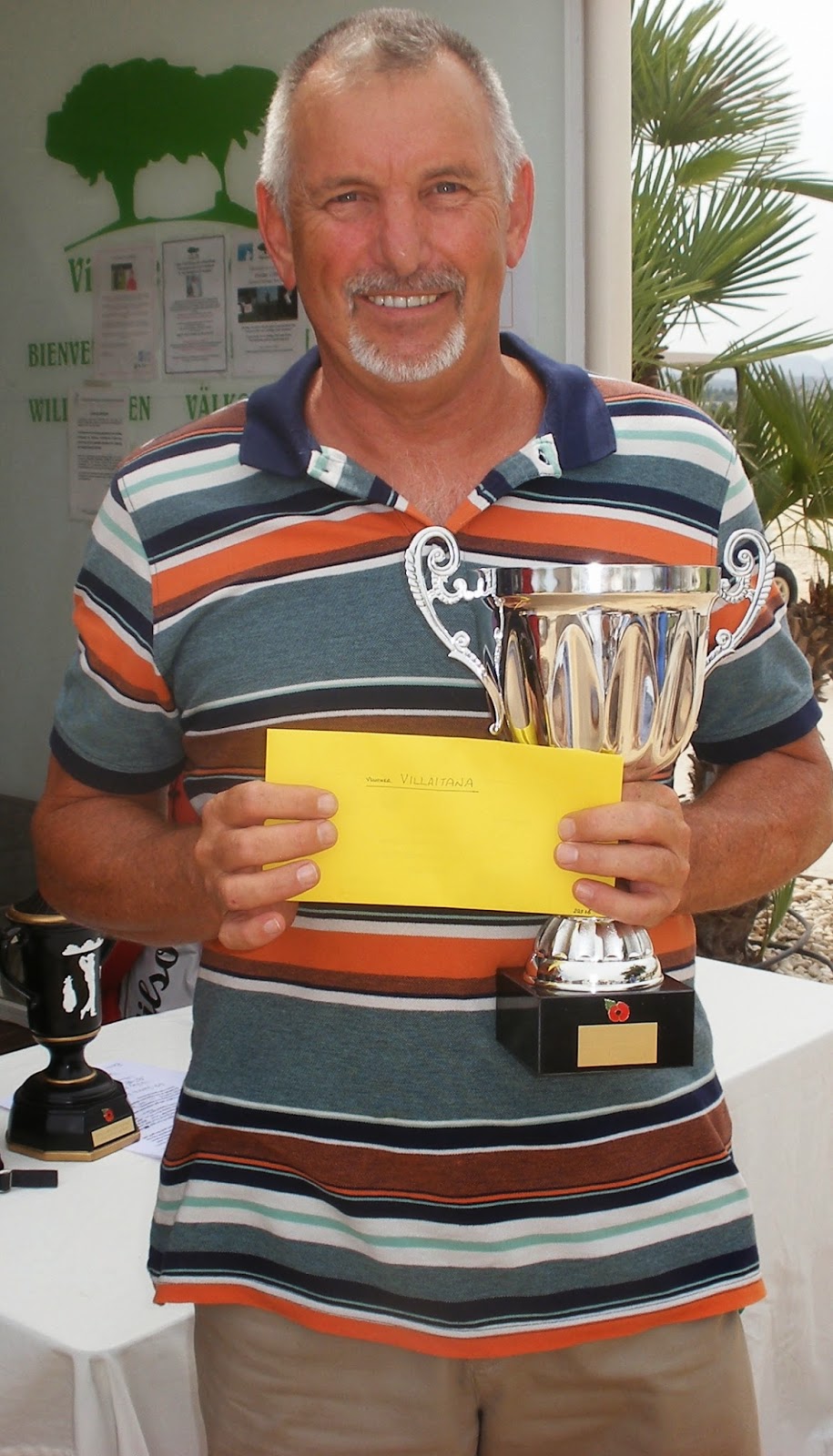 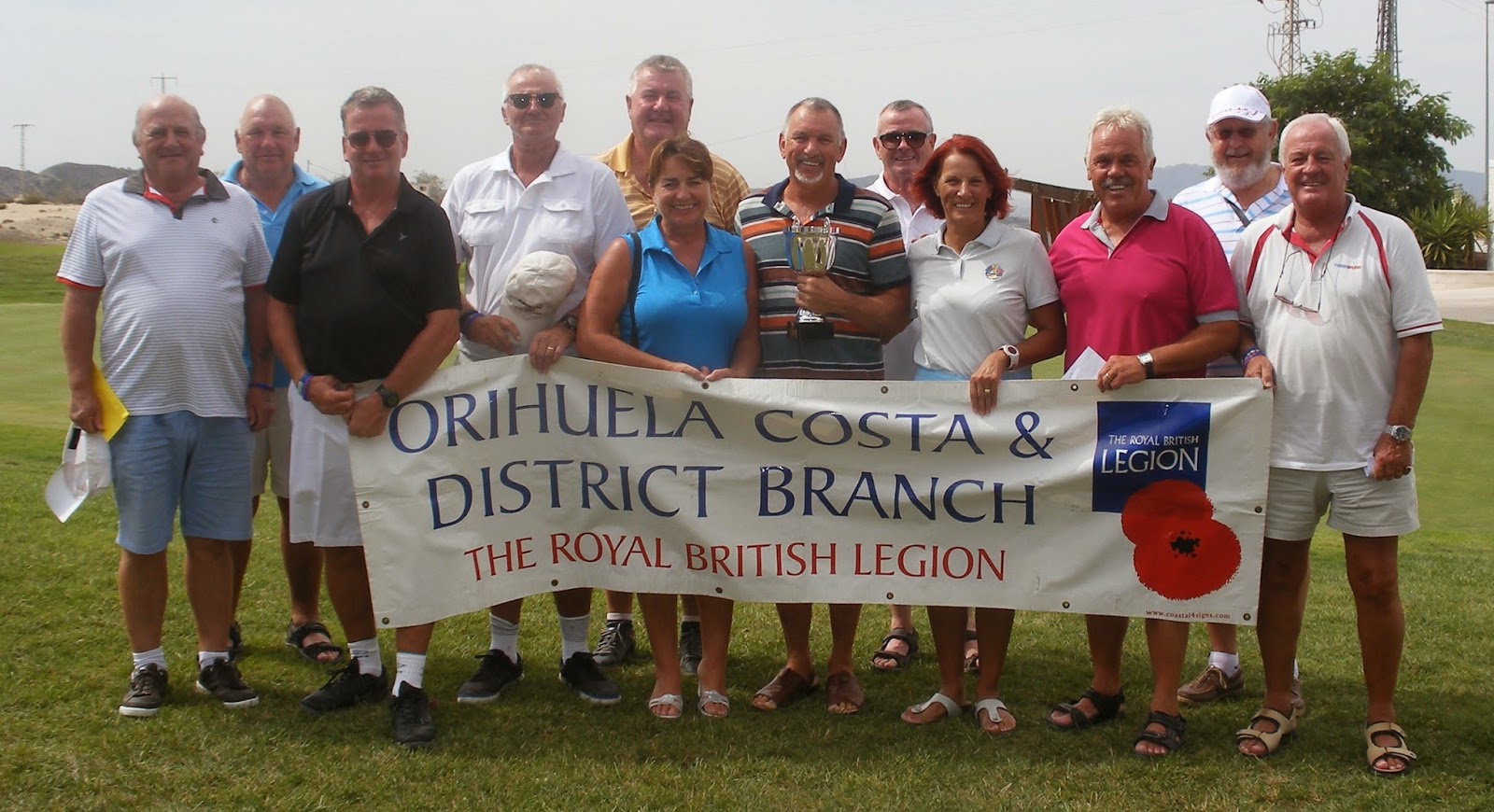 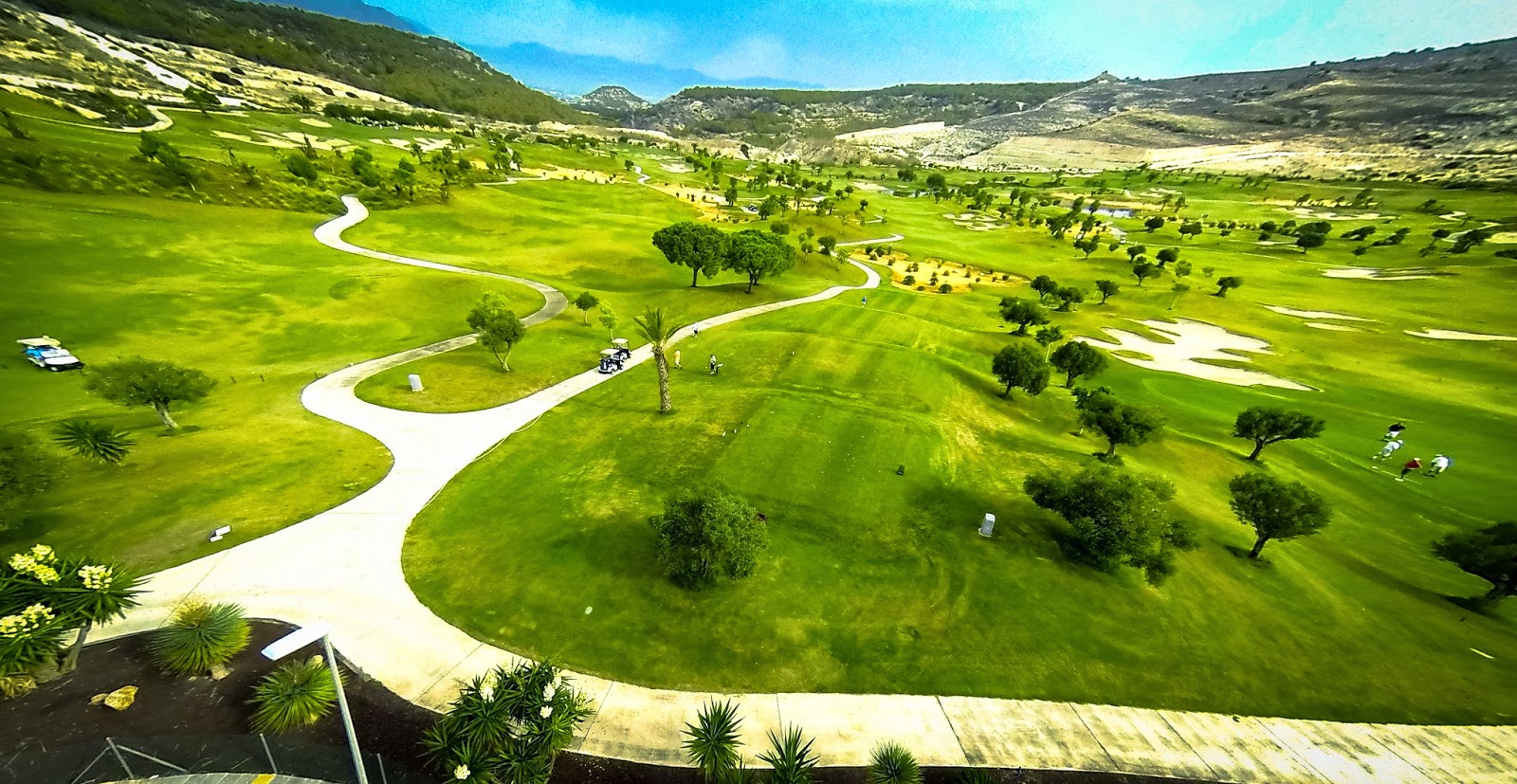 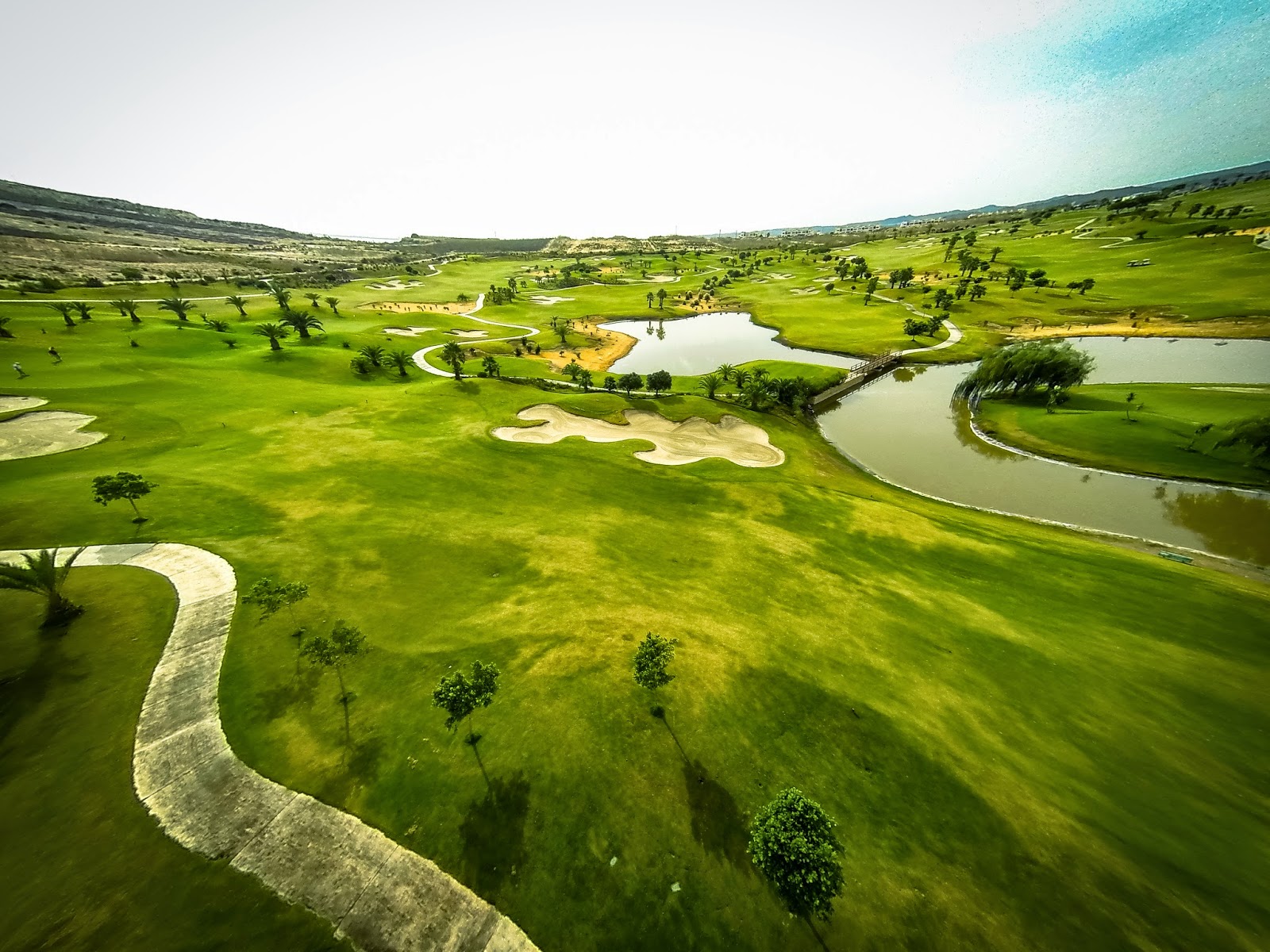 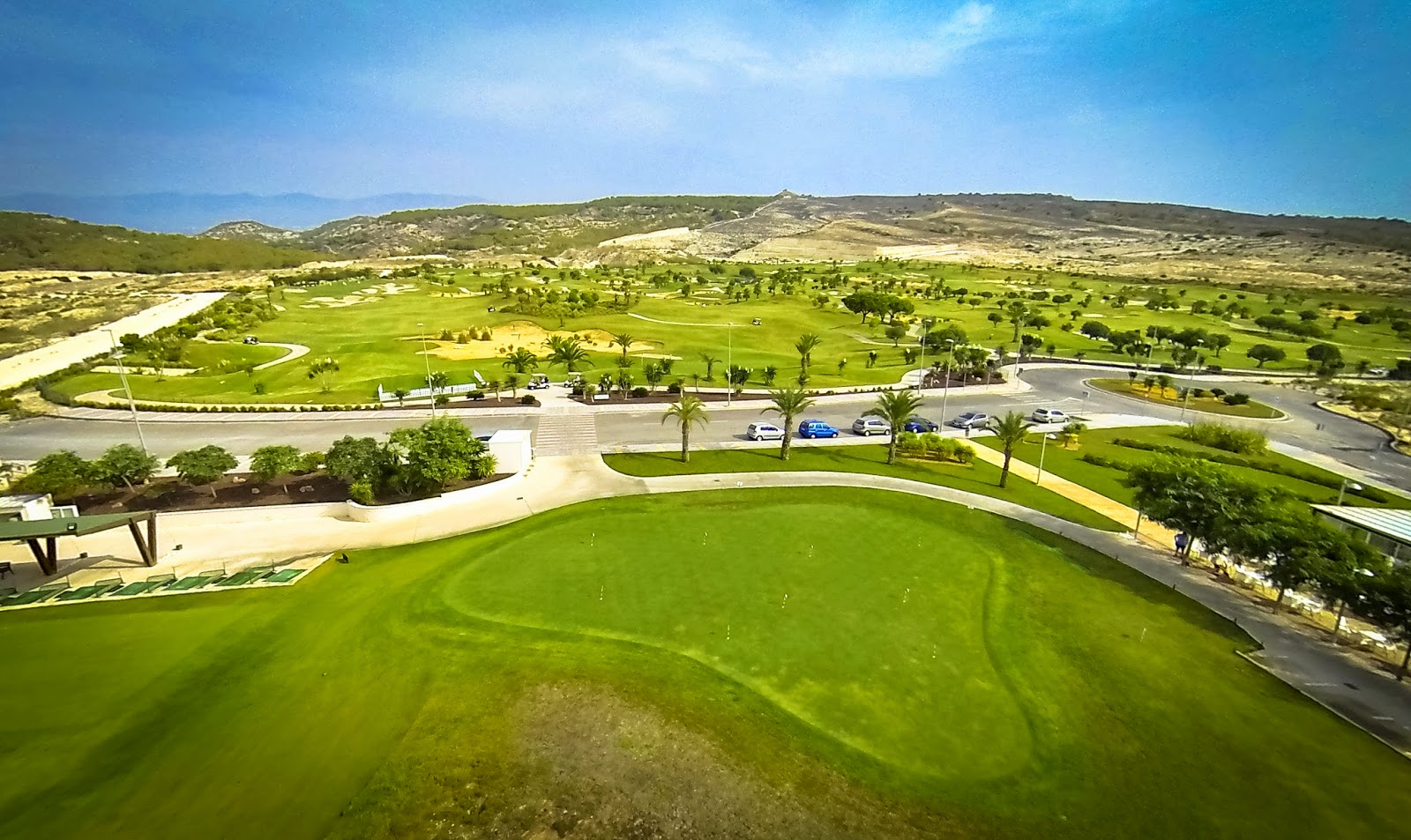 A little quip from Mick the Gip

I'm working as hard as I can to get my life and my cash to run out at the same time.  If I can just die after lunch Tuesday, everything will be perfect.

Doug Sanders.
Posted by Mick The Grip at 16:41 No comments: 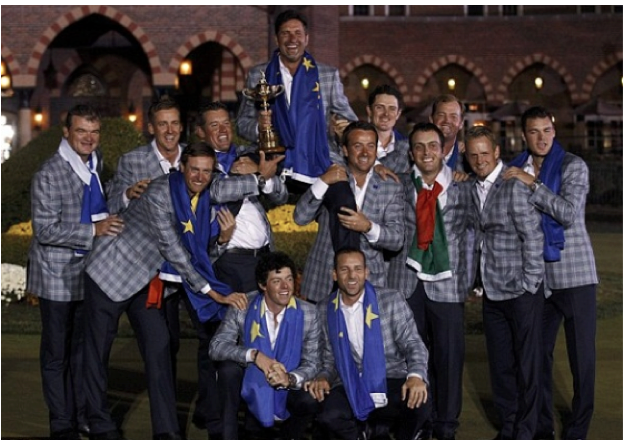 The Victorious Ryder Cup Team 2012
EUROPEAN CAPTAIN Paul McGinley was hoping most of his team could play in the Welsh Open at Celtic Manor this weekend as he himself set out the course to resemble Gleneagles.  “It would be good practice, but I appreciate some of the lads are tired, and rest is just as important,” he told reporters.  As long as they don’t rest on their laurels next week; and we see more happy snaps like this.

THE 2014 VOLVO WORLD MATCHPLAY returns to England for the first time since 2007, but not at Wentworth, its original home.  The London Golf Club in Kent will host the October 15th championship on it’s International Course, reputed to be one of the finest downland courses in Europe.
The first Volvo World Matchplay was won by Arnold Palmer at Wentworth in 1964, and has recently been played in Spain and Bulgaria.  Defending Champion Graeme McDowell said: “It will be nice to have the Volvo back in England for this 50th anniversary.”
THIS IS WHAT you could have won:  Desolation for Frenchman Romain Wattel at the European Masters in Switzerland. The BMW i8 sports car awarded for a hole in one on the 11th green had been snapped up the day before by a delighted Graeme Storm.  BMW mopped Wattel’s tears and invited him to take his pick and drive for a year one of the cars on display in the tented village.

At the Dutch KLM Open last week the prize for a hole in one on the 15th was a trip to outer space offered by XCOR Adventurous Expeditions.   Unfortunately the winner, Andy Sullivan, suffers from altitude sickness, so he wasn’t exactly over the moon with his prize.  Like Wattel, he would have preferred the BMW.

THE NIKE VAPOR IRONS, comprising the Vapor Pro, Vapor Pro Combo and Vapor Speed, were launched in New York last month.  Rory McIlroy and Tiger Woods, who apparently had a ‘big input’ in their creation, were there to help promote them.
The irons feature “Modern Muscle Technology” (well they have to call it something) that moves the CG closer to the toe, positioning it in the centre of the face.  This apparently puts more weight behind the ball at impact to improve precision and stability.  “Designed by the world’s two best players!” boasted a Nike spokesman,  “Yours for just under a thousand dollars, and suitable for golfers of all abilities.”  Yeah, right.
AFTER THE RYDER CUP some of the European team will be heading to China for the ”Final Series” of the Race to Dubai. The BMW Masters on 30th October is the first of the four “Final Series” tournaments followed by the HSBC Champions in Shanghai.  The Turkish Airlines Open in Antalya is next, and finally the DP World Tour Championship at Jumeirah  on 20th November.  Rory McIlroy is leading the rankings comfortably, with Sergio Garcia and Jamie Donaldson trailing in his wake.
After China, Turkey and Dubai McIlroy will be heading down under to defend his 2013 Australian Open title on 27th November, while Adam Scott will be doing his best to wrest it from him and win the Triple Crown.  Perhaps the globe trotting golfers can all go home for Christmas then, if they can remember where ‘home’ is.
“I’M HITTING THE BALL as well as ever, it just needs a bit more work.”   Phil Mickelson was still upbeat after his unspectacular PGA Tour season effectively came to an end at Cherry Hills; where he withdrew after a 6 over par 76 in the BMW Championship.  After recent comments from his rivals about his age and winding down Mickelson (45) says he wants to end the season with a win somewhere.  OK Phil, just not at Gleneagles.

"I can't wait until we make an eagle."

Chi Chi Rodriguez, on his pretty partner in a mixed-pairs tournament giving him a kiss each time they birdied.
Posted by Mick The Grip at 13:41 No comments:

"That'll be Jack Benny looking for lost balls."  Bing Crosby, when a diver came out of the lake at the 16th hole at the Crosby Pro-Am.
Posted by Mick The Grip at 12:10 No comments:


David Smith of Quesada has For Sale:   Taylormade R1 with

Harry Vardon's caddie, after Vardon asked him "What should I take here?"
Posted by Mick The Grip at 10:17 No comments: