IN THE BUNKER WITH MICK THE GRIP 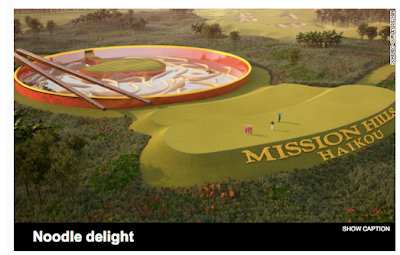 GOLF IS BIG in China.  The country’s 98 million middle class households are urging their youngsters to take up the sport.  But in Mission Hills, Hainan Island, a golf course with a difference is being constructed. Complete with manufactured gale force winds, it will include a replica of the Great Wall of China winding its way down the fairway, Mayan Temple ruins, and an island-green hole featuring an enormous noodle bowl complete with chopsticks.  "Traditionalists will probably hate it," course designer Brian Curley admitted,  "But this is real golf, with real clubs and real fairways.”   It’s golf Jim, but not as we know it! To view some of the fantastic hole creations go to Google Images

The Nike commercial featuring Tiger and Rory hitting impossible shots into soup bowls and glasses is a good laugh, but accentuating  the rivalry and charisma between their two star stablemates is advertising bliss for Nike; the clash in Dubai was unmissable.  As was the Swoosh.

NEW EUROPEAN CAPTAIN Paul McGinley has been vice captain on two winning Ryder Cup teams.  Tom Watson led the USA to victory at The Belfry in 1993, their last win on European soil.  Both players are unbeaten in the Ryder Cup, but McGinley’s four career victories pale next to Watson’s seventy.  If the Ryder Cup was judged on the playing credentials of the Captains then Europe would stand no chance.  But it will be judged on the performance of the players    McGinley may be the Captain to inspire McIlroy and Co. to produce their best. After backing him so vehemently they will have to.

GOLFERS WILL shortly be able to swap a cold and windswept English course for state of the art facilities under cover. The Golf Dome at Seaton Carew, Hartlepool, (membership £100 per year) will include an indoor driving range with a crosshair target to track the flight of the ball, and a sand bunker and chipping range.  However, the highlight will undoubtedly be it’s simulator bays, which offer golfers  “the  chance to experience the challenge and excitement of playing on a choice of 80 real, international courses, in a temperature of 24 degrees C.”  You’ll think you’re in Spain.  Till you step outside.
THE DECISION to phase out anchored putters is naturally unpopular with the tour golfers who have been winning with them, but Purists will applaud the step back towards the traditional.    Sam Snead’s “sidesaddle” method could be the answer.  Snead tried using a “croquet style” putter late in his career after his putting deteriorated, but it was banned after he started winning again.   “Bob Jones got it banned,” complained Snead,  “I would have won Augusta again if they let me putt that way.”   Apparently the “sidesaddle” method he adopted afterwards is still legal.

ACCORDING TO TaylorMade (here we go again) their new R1 driver offers the greatest adjustability of any driver in history.  Their research indicates 80% of golfers are using the wrong loft, thus losing distance, so the R1 has 12 loft settings, as well as seven face angle positions which can be changed without affecting the loft, a benefit exclusive to TaylorMade. The moveable shot shape weights can be adjusted to promote either a draw or a neutral/straight trajectory, plus improvements in aerodynamics mean the R1 is less affected by drag, giving more clubhead speed for greater distance.  Yet another “game changing innovation!”

RORY MCILROY comments:  “Changing equipment is no big deal, a lot of the manufacturers have their clubs made in the same factories.”   Even so, he will have had to make some adjustments, not least switching from the Titleist Pro V1X ball.   If he is victorious perhaps he will tip his Nike cap to the crowds and throw them his Nike 20X1X ball as he walks off the 18th green, if not fans will wonder whether his change was such a good idea.  Meanwhile, Titleist will be talent spotting in China.

Until next time Happy Golfing.