IN THE BUNKER WITH MICK THE GRIP FOR NOVEMBER

IN THE BUNKER WITH MICK THE GRIP. 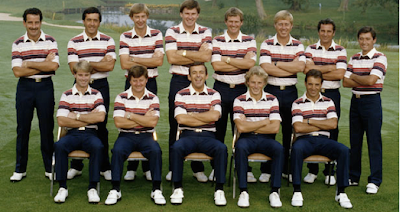 TONY JACKLIN might have two left feet in Strictly Come Dancing, but European Ryder Cup teams will always be grateful to him. Until Jacklin took over as Captain the Ryder Cup was looked on as a showpiece event for the U.S.   “ I said I would only do it if we levelled the playing field, and that meant flying Concorde, taking caddies and having every facility our opposition had.” he said.

By radically altering the whole approach to the event Jacklin brought pride to the locker room and led the Europeans to a landmark victory in 1985 at The Belfry, their first for 28 years. In 1987 his team went even further, beating the Americans on their home ground at Muirfield Village in Ohio. In his fourth stint as captain the European team retained the cup for the first time, making him their most successful Ryder Cup Captain ever.  He couldn’t be Rudolf Nureyev as well.THE 2013 GOLF WORLD CUP, at the Royal Melbourne Club, sees 60 of the world’s best competing for a prize purse of $8 million.  The competition format is similar to that planned for the 2016 Olympic Games.  With the Australian PGA and Masters under his belt, Adam Scott was aiming for the individual and team event to keep alive the "Scotty Slam" – winning all three Australian Majors and the World Cup – heading into the Australian Open in Sydney.   Scott would have had no difficulty pulling in the crowds.  He and fellow Ozzy Jason Day are the Mick Dundees of golf at the moment and the fans down under couldn’t give a XXXX for anyone else.  Unfortunately for Scott, Rory McIlroy found his form and pipped him at the post.  Well done Rory, nice to see you back, and thanks to both for a great weekend of golf.HENRIK STENSON stormed the DP World Tour Championship with his 25-under-par total.  After he became the first player to win both the FedEx Cup series and the European Tour's money list in the same year Ian Poulter was entitled to ask: "What is he running on?"   After the FedEx Cup final standings  Stenson’s winnings totted up to over $11 million.  Tiger Woods, down to No. 2. still received a $3 million bonus.PUTTING IT into perspective, Jason Day learned that eight of his family members had died in the Philippines Typhoon Haiyan, among them his grandmother, uncle and six cousins.   Even golfers’ millions can’t change the course of nature.
LEE WESTWOOD took time out of his busy schedule to collect a cheque for £228,600 for Help for Heroes from the National Golf Club Challenge, of which he is patron.  The Challenge is an inter-club competition in which golf clubs throughout the U.K. compete against each other while raising funds for charity.  NGCC Director Stacey Jeffries said: "Lee has been sensational since he came on board back in 2010, he always does all he can to help.”
BRANDT SNEDEKER injured his leg  when he fell off the Segway he was riding at a corporate outing.  He immediately withdrew from the Australian PGA Championship and returned home to Nashville. His injuries could heal in a couple of weeks, or it might take as much as two months.  Sometimes it seems pro golfers keep their brains in their golf bag.THE  ANNUAL Father/Son Challenge takes place from the 12-15th December at The Ritz-Carlton Golf Club, Grande Lakes, Florida.   Davis Love III and his son  (Davis Love IV?)  return as defending champions.  Jack Nicklaus won the tournament in 1999 with his son, Gary, this year he partners Jack Jnr.    Bernhard Langer partners his daughter, Christina, and Fuzzy Zoeller his daughter Gretchen.   The event is for players who have won a Major or The Players Championship, so it probably won’t be a massive field.
If you fancied a game at the Ritz- Carlton,  a round (for three ) costs around $500 but you are provided with a caddie (who will expect a large tip.)Until next time – Happy Golfing.Contact Mick for all your regripping and repair requirements. 638 859 475.