When he hits the ball into a tough place, that's when he's most relaxed.  I think it's because he has so much experience at it.

IN THE BUNKER WITH MICK THE GRIP. 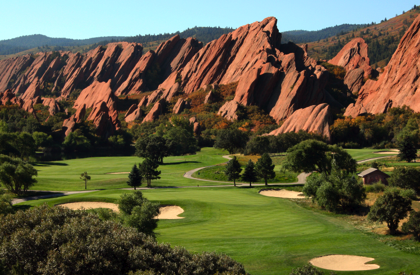 COLORADO GOLF CLUB, USA, where the European ladies will be hoping to retain  the Solheim Cup this weekend.  By the time you read this it will be death or glory. It is now GLORY.

I WAS GOING to show the picture of 77 year old Gary Player in the altogether which recently graced the front page of the ESPN fitness magazine, but I thought you might be having your breakfasts.  Even so, he can still do 1000 situps a day, lift weights and then enjoy a round of golf so who am I to knock him.
TOM WATSON  took time off from the British Open to visit Gleneagles, site of the 2014 Ryder Cup.  He laughingly recounted his efforts at espionage.
"I said to the staff:  'You wouldn't mind getting me the pins for the Johnnie Walker Championship (An annual European Tour tournament) for the last five years, would you?  They said, 'Yes, we would mind, so you're not getting them!’”
ACCORDING TO THE Daily Mail and the Daily Telegraph, The PGA Tour is in preliminary discussions to take over the European Tour due to the latter's financial struggles.  Tim Finchem and Keith Waters of the European Tour denied an impending PGA Tour takeover.  (They would, wouldn’t they.)  Last year five European Tour events were cancelled and Waters was expressing concern over lower ranked players earning their tour cards for 2013.  We will doubtless hear more on the subject.
JUST WHEN we thought drivers couldn’t get any more adjustable, along comes the Taylor Made SLDR, (Slider) which features an adjustable, sliding weight system which launches the ball higher and longer.  The key to the leap in distance is a lower and more forward centre of gravity, which they say promotes lower spin and faster ball speed.   Using TaylorMade’s movable weight technology, SLDR features a blue, 20-gram weight that slides on a 21 point track located on the front of the sole.  This shifts the clubhead’s CG horizontally towards either the heel, to promote a draw, or the toe, to promote a fade, promoting a shot dispersion range of up to 30 yards.  In addition, the Loft Sleeve Technology allows easy adjustment of the loft, with 12 positions of loft change.
JUSTIN ROSE, the first Englishman to win a major in 17 years and the first to win the U.S. Open in 43 years has gone from 25th place to 1st in the Race to Dubai rankings.   The 32 year old was last year’s runner up at Jumeirah and set a new Earth Course record of 62.   Justin learned the game with his father at his home course, Hartley Wintney, Hampshire.  “I had a good grounding in golf etiquette there, and all the do’s and don’ts,” he remembers, “the secretary used to give me a rollicking for having my hat on in the club house, stuff like that,.”   Quite right too, Standards boy, Standards!
A GOOD PRACTICE DRILL Graeme McDowell uses in sand is to draw a square around the ball about four inches wide. The object is to remove the sand from that box and splash it on the green.
The key to controlling the distance the ball goes is to control the amount of sand you take, this drill does that perfectly.  It also helps to contact the sand in the same place, and is easy to set up.

BRANDT SNEDEKER won the Canadian Open last month after Hunter Mahan, who was leading by two strokes, left to be with his wife as she gave birth to a daughter, Zoe Olivia, in a Texas hospital.  Snedeker, who won by three strokes, said:  "Baby Zoe will be getting a nice gift from me, if not for her I probably wouldn’t have won.”   Maybe it’s different if you’re a millionaire like Mahan, but my wife assures me that if I had been a professional winning a Championship and had left it in order to get in her way in the labour ward she would have chucked a bedpan at me.
Until next time: Happy Golfing.
Contact Mick for all your regripping and repair requirements. 638 859 475.
Posted by Mick The Grip at 11:29 1 comment:

Well, in plain English, my driving is bad, my chipping is bad, my putting is bad, and I'm not scoring at all.  Apart from that I got up this morning so I guess everything's OK.     Bob Wynn.

A little quip from Mick the Grip. No. 75

I remember being upset once and telling my Dad I wasn't following through right.  He said "Nancy it doesn't make any difference to a ball what you do after you hit it."    Nancy Lopez.


IN THE BUNKER WITH MICK THE GRIP

FEW GOLFING HOTELS are as rich in history as Greywalls, an elegant Edwardian country house situated on the edge of Muirfield’s links, overlooking the 9th and 18th greens and the Firth of Forth.  It was frequented by King Edward VII, and Open champions such as Watson, Palmer and Nicklaus have traditionally stayed there.  Designed in 1901 by Sir Edwin Lutyens as a “dignified holiday home,” Greywalls became a hotel in 1948, and is a treasure trove of memorabilia.  Pictures and signatures of golfing greats adorn the walls of the little bar where many an Open Champion’s celebration toast has been made.  The Open contenders and their entourage tend to rent houses in the area now, so the new Open champion, whoever he turns out to be, will probably not be raising the claret jug at Greywalls this weekend, but he could pop in for a wee dram.

FIFTY YEARS AGO  Cuba’s Fidel Castro and Che Guevara staged a publicity stunt game of golf that allegedly poked fun at U.S. president Dwight Eisenhower, who two years earlier had declined meeting the new Cuban leader.  Castro, who was known to be a notoriously bad loser, lost the match.  Shortly afterwards he ordered all the golf courses on Cuba to be closed down, calling the game elitist.  Now several luxury golf resorts are being planned, with the aim of bringing much needed revenue to the cash strapped island.  It could also be because Castro’s son Antonio is a pretty fair golfer, and won the Montecristo Cup held there in April.
THE BRITISH Open Champion of 1931, Tommy Armour “The Silver Scot” was born in Edinburgh in 1894.   He lost his sight to a mustard gas explosion in WW1, and had a metal plate inserted in his head.  During his convalescence, he regained the sight of his right eye, and was able once more to play his beloved golf.  Emigrating to the United States, he became a professional golfer in 1924, and might have  been known as one of the greatest ever golfers had the yips not affected him in the prime of his career;  he is in fact credited with creating the term “Yips”  at the 1927 Shawnee Open, in which he carded a 23 on the par-five 17th hole, a dubious single-hole achievement that has never been beaten.  He still managed to win the U.S. Open in 1927 and the PGA Championship in 1930.

Armour would become one of the leading instructors of his generation once his competition days were over.   In his spare time he was a master bridge player, and classical violinist (not bad with one eye!)  His grandson, Tommy Armour III,  is a two-time winner on the PGA Tour. Grandad would have been proud.

CALLAWAY has unveiled its new FT Optiforce driver, with two clubhead variations. The driver offers loft and lie adjustability (a first from Callaway.) The OptiFit hosel  allows players to adjust the driver’s loft 1 degree down or 1 or 2 degrees up. The loft setting helps golfers adjust their launch angle and amount of backspin, while the lie setting, with neutral or draw, will help golfers adjust side angle and sidespin. Combined  with the differences in the 440cc and 460cc heads, golfers of all abilities can use the simple adjustability solution  to find their optimal launch conditions and ball flight.

Callaway claim the Ft Optiforce is the fastest and most aerodynamically efficient driver they have produced.  It has been measured with 23 percent less drag than a conventionally shaped driver.

DONALD TRUMP, commenting on the Industrial Wind Farm the Scottish Government is proposing to construct 1.1/2 miles offshore from his Golf Resort near Aberdeen:  “Each turbine will be 65 metres high and because it’s a test site they will be different colours.  It will look like a junkyard.  Alex Salmond says wind farms encourage tourism, which shows the level of insanity we’re dealing with here.  I will sue him to hell and back if necessary.”   And they were such good pals.

Until next time: Happy Golfing.
Contact Mick for all your regripping and repair requirements. 638 859 475. 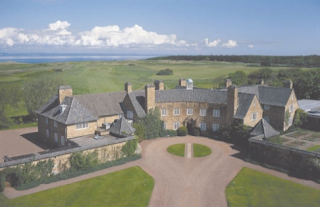