THIS COULD SAVE YOUR LIFE!

Golf is a game in which a ball - one and a half inches in diameter - is placed on a ball - 8000 miles in diameter.  The object being to hit the small ball, but not the larger.      John Cunningham.

All I have against golf is that it takes you so far from the clubhouse.   Eric Linklater. 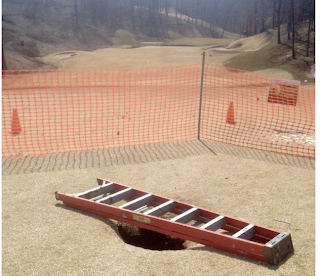 Photo Credit: The St. Louis Post-Dispatch
A HUMAN HOLE IN ONE?  Golfer Mark Mihal was waiting on the fairway to play his shot at Annbriar Golf Course Illinois when he suddenly disappeared from view.  His three fellow golfers immediately rushed over to the spot where he had been standing to see what had happened to him.  They found that an 18ft deep sinkhole had opened up and swallowed him whole.  The city of St. Louis sits on limestone that tends to dissolve in rainwater, and sinkholes are fairly common.  They are however, usually visible.   Mihal, 43, who suffered a dislocated shoulder, said it has not put him off golf, but he might try a different course.

BRITAIN’S CHRIS WOOD, 25, managed an eagle on the final hole to win the Qatar Masters and his first European Tour title.  Wood, who finished in the top five in the 2008 Open, began his last round at Doha with a three shot cushion, but stumbled to trail Sergio Garcia and S. Africa’s George Coetzee by one shot after 17. He then sent a huge drive down the 18th fairway followed by a 5 iron to 12 feet and sank the putt to win by a single stroke.  “I knew it would be hard,” he admitted,  “They get a great field in these desert events, so this means a lot of world ranking points for me.”

AUGUSTA IS LOOMING.  A little bit of background history:  The course was designed by Alister Mackenzie, who worked with Harry Colt on courses in Great Britain before emigrating to the U.S. in the early 1920s.  As well as Augusta, Mackenzie designed Cypress Point in California and Royal Melbourne in Australia. All three are considered among the world's very best golf courses.

The tradition of the Green Jacket dates to 1937. Club members wore the single breasted ‘Masters Green’ jackets during the tournament so that spectators could easily spot them if they needed information. The Augusta National club logo appears on the breast pocket and the brass buttons.  The winner of the Masters takes the Green Jacket home with him and keeps it for a year, then he returns it to the club, but the jacket is still considered ‘his ’and he is allowed to wear it whenever he visits.   Augusta National membership is by invitation only. When a membership slot opens, the club decides who to invite and mails the invitation.

STEVE STRICKER, who finished two strokes behind Tiger at the WGC Cadillac this month, may have regretted spending 45 minutes on the putting green with him the day before, helping him with his posture.  Woods went on to win and claim his 76th PGA Tour win.   He did thank Steve for his advice.
For the first time in five years, Woods has two wins before the Masters.  He will be aiming to update his green jacket collection to five, one behind Jack Nicklaus. He could also return to World No. 1 with a win at Bay Hill in the Arnold Palmer Invitational this weekend.
RORY MCILROY was 10 under par in the last 27 holes at the WGC Cadillac, with a 65 on the Sunday which included an eagle and five birdies.  He tied for ninth place.  His only tournament now before the Masters will be the Shell Houston Open, on March 28th.  If he can forget his girlfriend and his wisdom teeth and remember his watch he should be worth a bet at Augusta.
Phil Mickelson has three green jackets, and would love a fourth.  Brandt Snedeker must be a good bet at 22-1 if his ribs have recovered. It would be great to see any of our brave boys in the winners enclosure but whether it’s won by a favourite or an outsider The Masters will be as always, unmissable.
You can contact me for all your gripping and repair requirements on 638 859 475.

A DAILY QUIP FROM MICK THE GRIP

Golf is a game whose aim is to hit a very small ball into an even smaller hole, with weapons singularly ill-designed for the purpose.  Sir Winston Churchill.

"HARE" WE GO! MARCH MADNESS AND A PADDY'S DAY SPECIAL

All prices include fitting

There are limited stocks at these prices, don't miss out, call or email today.

Check out the website for other products and offers.